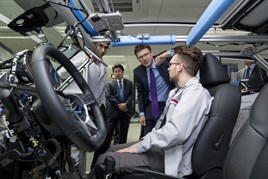 The Government has pledged its continued grant support to motorists buying an EV as it announced £109 million of funding for research into autonomous cars and low-emissions transport.

Car dealership customers will continue to benefit from up to £4,500 off the cost of an ultra-low emission car, up to £2,500 off a hybrid and receive £500 towards the installation of a charge point in their home, the government announced today.

In a move that aimed to boost the development of future low-emission and autonomous transport solutions, seven low carbon vehicle projects set to receive a share of £62 million funding as part of a new £109 million funding scheme which, the Government has stated, will safeguard 2,370 jobs.

Business Secretary Greg Clark and Transport Minister John Hayes announced the plans, which form part of the Industrial Strategy and the Government’s Plan for Britain.

Schemes include the development of a high power battery suitable for high-performance vehicles; a project to address gaps in and strengthen the UK supply chain; the development of the fuelling system for a concept gas tractor; and technologies to reduce the weight and improve electrification in SUV vehicle platforms.

A further seven projects have won funding from the Government's Office for Low Emissions Vehicles (OLEV) to advance the development of a range of ultra-low and zero emissions vehicle technologies in the UK.

Business and Energy Secretary Greg Clark said: “Low carbon and driverless cars are the future and as a Government we are determined through the Industrial Strategy to build on our strengths and put the UK at the forefront of this revolution.

“Investment in this technology is an integral part of this Government’s efforts to ensure the UK auto sector remains competitive and world-leading.”

“The number of ultra-low emission vehicles on our roads is at record levels and our renewed support for these exciting technologies is yet another significant milestone.”

The Government also announced the first set of winners of the second round of its connected autonomous vehicles competition, CAV2, with projects set to receive a share of up to £31 million, match-funded by industry.

Ideas include projects using cars and pods platooning, or going in formation, to transport passengers from Stockport train station to Manchester Airport, create vehicles capable of driving in a range of road environments and technology which could make any car operate autonomously.

Today’s announcements follow the launch of the first phase of Government’s £100 million CAV test bed programme at the end of March with a competition worth £55 million.

In a speech to the SMMT Connected Conference in London, the Business Secretary outlined plans to create a cluster of excellence in CAV testing along the M40 corridor between Birmingham and London.

The programme will use some of the UK’s existing CAV testing centres to create a concentrated cluster of testing facilities in the UKs automotive heartland in the West Midlands, including; Coventry, Birmingham, Milton Keynes as well as Oxford and London.