A new study conducted by online car servicing provider Servicing Stop of the views of more than 1,600 motorists once Britain leaves the European Union revealed a mood of positivity.

Forty per cent of motorists believe that once the divorce has been settled between Britain and Europe, manufacturers will start producing parts and cars in the UK bringing in more business and a lot more jobs.

A third more are looking towards a trade agreement that will prevent tariffs being imposed on imports and exports, and more than a quarter are conflicted in believing that UK manufacturers will move outside of Britain and into Europe, taking jobs but keeping the cost of production at bay.

When asked what the benefits of Britain leaving Europe will be to the automotive industry, more than 40% of motorists said Britain would be able to forge trade relationships with countries outside of the European Union including China, the USA and India.

A further quarter of people believe British-made cars could become more popular and more than one fifth believe more factories will be built in Britain.

Nine per cent of motorists also believe more jobs will be on offer to British people as a result.

Chief executive and founder of Servicing Stop Oly Richmond, said: “The one phrase we keep hearing, no matter what the industry, is ‘these are uncertain times’.

“The reason it is used over and over again is because there is simply no other word to describe our current predicament in the fall-out between Britain and Europe.

“We do not know what will happen to the automotive industry in a post-Brexit Britain, but we can hope that a trade agreement is settled, free trade prospers and prices remain relative to what we see today.

“What I can say is it is great to see motorists keeping the faith and patriotic spirit alive. What will be will be, but we won’t stop trying to make it work.”

The industry, including manufacturers and servicing providers, are backing a trade agreement in a bid to preserve free trade and prevent production costs increasing by thousands of pounds per vehicle. 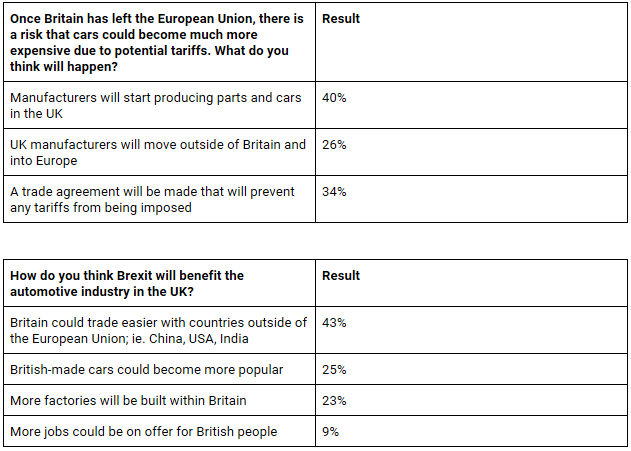 > The survey was completed through CNIT in May 2017 of 1,698 UK motorists based on a broad and equal range of the respondents location, employment, gender and age as well as vehicle type and age of vehicle profiles.