The 2017 new car market has slipped into overall decline after a poor result for May.

That drop followed a disastrous April. As a result, the year-to-date registrations volume now has fallen below 2016 too, by 6,513 cars.

The Society of Motor Manufacturers and Traders said it had expected May to be down and blamed the result on a number of factors, including the recent change in VED rates and the looming general election which might have affected purchasing patterns in the short term.

SMMT chief executive Mike Hawes said: "Although demand has fallen, it's important to remember that the market remains at a very high level and, with a raft of new models packed with the latest low emission and connected technology coming to market this summer, we expect the market to remain strong over the year."

Tasked with promoting the industry, the SMMT also pointed out that the market share for alternatively fuelled vehicles (AFVs) reached a record level, as carmakers continue to launch more competitive hybrids and EVs.

However diesel's market share has declined by 4ppts, with petrol taking back the lead as the powertrain of choice. 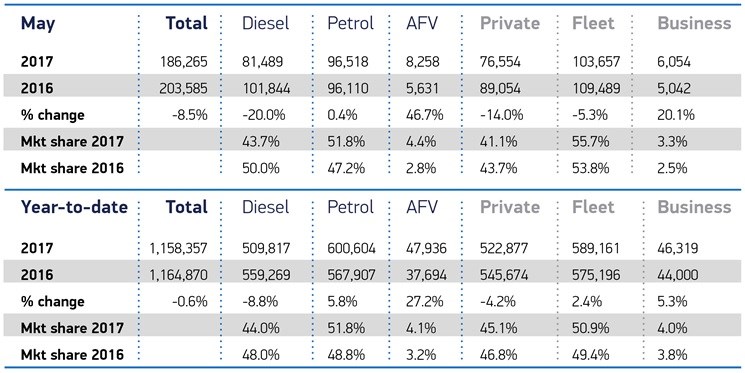 John Leech, head of automotive at KPMG UK, said: “The sharp fall in new car sales in May indicates that the peak in the UK new car market was in the first quarter of 2017. We should now expect to see a steady cooling of sales over the rest of the year and in 2018.

"UK consumer confidence for major purchases has been declining throughout 2017, as measured by GfK Nielsen, and the adverse changes to Vehicle Excise Duty applied in April 2017 are expected to dampen demand throughout the second quarter of 2017.

“Car manufacturers have switched their attention from the UK market to Europe in response to the sterling’s weakness and stronger consumer demand in the EU. German car sales were up 13% and French car sales were up 8%.

May and year-to-date new car sales by manufacturer 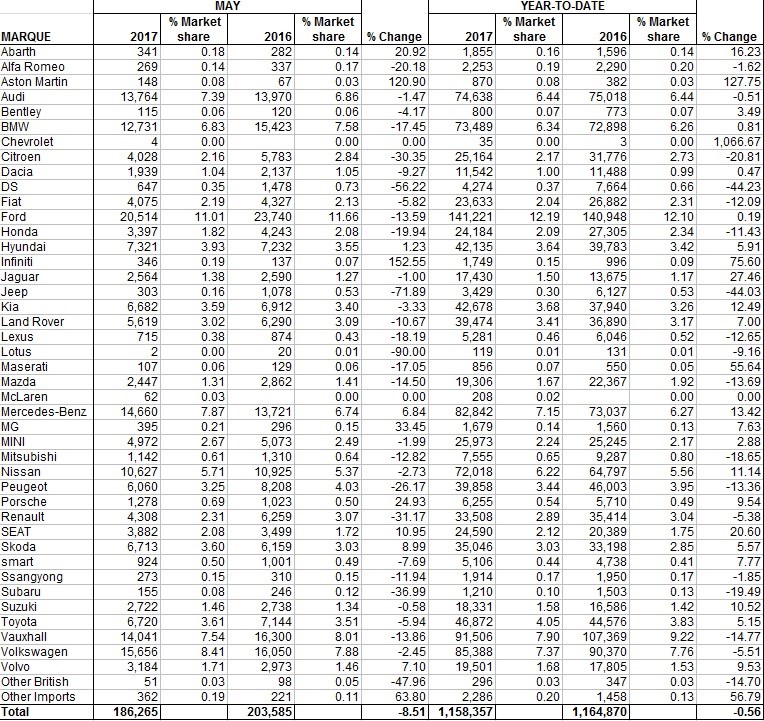