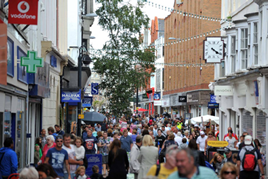 Rising prices and stagnant wage growth have led consumers to cut their spending for the first time in nearly four years last month.

Consumer spending in May was 0.8% lower than in the same month in 2016 after adjusting for inflation, the first year-on-year fall since September 2013, Visa said on Monday.

Visa managing director Kevin Jenkins said: "Our index clearly shows that with rising prices and stalling wage growth, more of us are starting to feel the squeeze."

The survey was done before last week’s snap election and the resulting hung parliament is expected to lead to further business and consumer pessimism, with the Tory government’s failure to win a majority prompting fears of troubled Brexit negotiations with the EU – and another election before the year’s end.

Retail sales in the first three months of 2017 suffered their biggest fall since 2010. Data published on Friday showed industrial output and construction faltered again in April.

Britain's overall economy was the weakest performer among the ‘group of seven’ rich nations in the first quarter of 2017.

Visa said bricks-and-mortar retailers suffered their biggest fall in sales in five years, which was only partly offset by strong growth in online sales. Growth in spending at hotels and restaurants - which has risen much faster than at retailers in recent quarters - slowed to an annual 3.3%, reported Reuters.

Spending on transport and clothing were the categories with the biggest falls.

The Visa figures strip out seasonal and inflation effects, and are adjusted to take account of the growing share of spending on cards rather than cash.