Data compiled by AID has revealed a “fast fading interest in diesel” as West Europe’s diesel sale shares dropped to 42.8% in August.

This marks the lowest monthly turnout in diesel sales in the region since the VW scandal in September 2015.

But in its latest figures, covering September, Cap HPI has reported that 50.9% of motorists still chose diesel over petrol in the used sector.

In its latest Black Book data, Cap HPI reports that based on a six months and 5,000-miles limit, data reveals that diesel values have remained steady over the past 12 months.

“For the good of the automotive sector, it’s time for composure, to bring an end to the scaremongering and look at the actual facts.

"Virtually across the board diesels have posted a stronger than average performance on values over the past three months combined with the fact that the overall diesel share of the sales market is higher this year than it was last year, by almost 2% in April and Sept.”

AID's report notes the severity of the shift away from new diesel cars in West Europe as a “sales crisis”, however.

Its figures showed that this August, compared with the same month just two years ago, West Europe’s diesel car share loss has reached a striking 8.1%.

This runs alongside the discovery that a “previously flourishing diesel car market” has lost 6.7% of its market share since Q4 2015.

AID closes the report with a warning about future diesel sales, stating: “The underlying change in consumers’ attitudes towards today’s blackened diesel cars appears to be changing faster than statistics can track.” 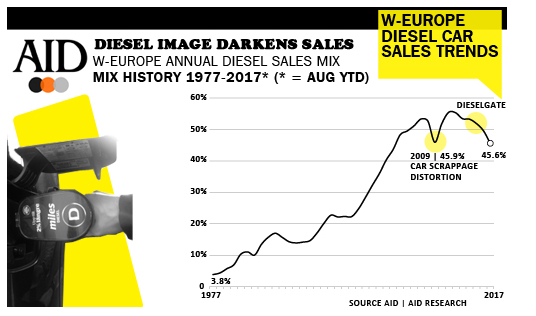