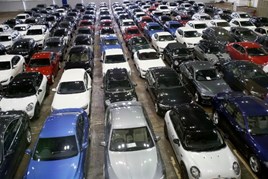 Cox Automotive claims that a mixed market in October has resulted in an increase in retail and stock funding sectors as wholesale divisions continue to show signs of slowing down.

Head of external relations at Cox Automotive, Philip Nothard, said: "The positive growth for Motors.co.uk suggests that dealers are preparing for the winter quarter by increasing stock on their forecourts, and also points to part-exchanged stock from the September plate change trickling through to retail."

Cox’s wholesale stock funding business, NextGear Capital, recorded growth once again, with average cost per unit reaching its highest in 2017, at just over £7,000.

The average holding days remained steady and in line with year-to-date performance.

Volumes through Manheim's physical and online car auctions held steady with a 0.5% increase month-on-month, and despite an 11% month-on-month decrease in ex-fleet volumes, part-exchange volumes grew by 9.2%.

Data also showed that average vehicle mileage was up 8% to 59,209, since September.

In the trade-to-trade market, Dealer Auction, saw average vehicle values decrease, down 4.8% on September to £4,474.

Nothard said: "The data confirms that there were patches of healthy consumer demand throughout October, but we have not seen the increase in unit activity that the wholesale market expected and the majority of dealers had hoped for."

"From a retail perspective, although our data shows that dealers have strong stock levels, there is a trend towards less attractive stock becoming more difficult to sell. Smart dealers will be looking at what they can do to ease prices to counter this.

"Looking ahead to November, early indications point to a slight increase in vehicles hitting the auctions and we expect this to be bolstered by pre-Christmas seasonal consumer demand later in the month.

"By the end of the year, we expect volumes and prices to regain the levels seen earlier this year, as dealers stock up for a potentially busy first quarter of 2018."