European car registrations were said to have demonstrated ‘resilience’ with 5.6% rise in October on the back of a 2.2% decline the previous month.

AFVs recorded a 5.5% share of the market, the fuel type’s second highest market share ever, as a total of 1,202,877 registrations were recorded by Jato Dynamics across the region.

The October total was the highest recorded for the month since 2009’s 1.26 million and saw Europe’s overall registrations rise to an increase of 3.6%, with 13.18 million units, over the first 10 months of the year – the highest volume recorded since 2007 (13.62 million).

Growth was driven by increased demand for gasoline, electric and hybrid vehicles, and the stellar performance of SUVs, said Jato, with strong results in major European markets including France, Italy, Spain, Poland and the Netherlands.

The performance of these markets offset the decline in demand for diesel vehicles, and the decline in the UK market where registrations were down by 12.2% compared to October 2016. 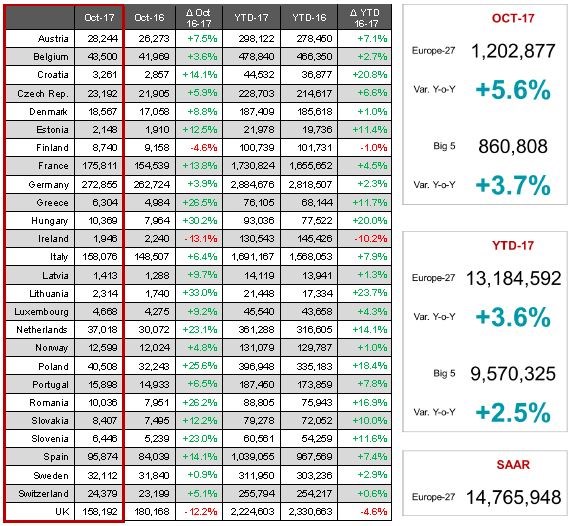 There was significant variation in the performance of fuel types in October. 619,300 petrol vehicles were registered during the month, meaning the fuel type accounted for 51.5% of the market, an increase in market share of 5.1 percentage points.

In contrast, demand for diesel vehicles declined, with 498,500 units registered, a decline in volume of 9.9%.

Felipe Munoz, global automotive analyst at Jato Dynamics, said: “Demand for diesel vehicles has declined following a series of initiatives to reduce diesel use, and subsequent confusion around proposed bans.

“This shift has boosted gasoline and AFV registrations. Growth of electric and hybrid vehicles has accelerated during the last four months and consumers are more aware of the choices available.

“But, despite a series of launches, there’s still limited AFV choice in categories such as the SUV segment.

“When looking at the AFV data, hybrids still lead the way, accounting for 59% of the total volume for the AFV category, compared to PHEV and fully electric (BEV) vehicles, which accounted for 23% and 17% respectively.”

The performance of mainstream brands contributed to the positive October performance, Jato said, premium brands recorded a 1% decline, and accounted for 23.5% of total registrations.

The Volkswagen  Golf held on to its number one position, following an increase in registrations of 24%, compared to the same month last year.

As a result, the Golf was the best-selling vehicle in nine markets. 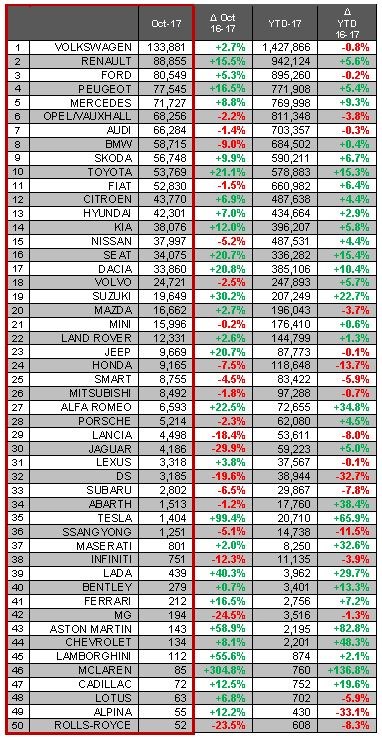