The strength of Europe’s car retail revival was enough to override the UK’s decline as registrations across the region rose by 3.1% to 15.6m units during 2017.

The UK’s decline was the second largest by percentage, its 5.7% decline overshadowed only by Ireland’s 10.4%, and the largest by volume as Jato Dynamics’ analysis of 27 nations’ car retail markets revealed five countries had experienced a shrinking market across the 12 month period.

But emerging new car markets in Eastern and Southern Europe and the growth of the SUV sector was credited with the region’s growth. 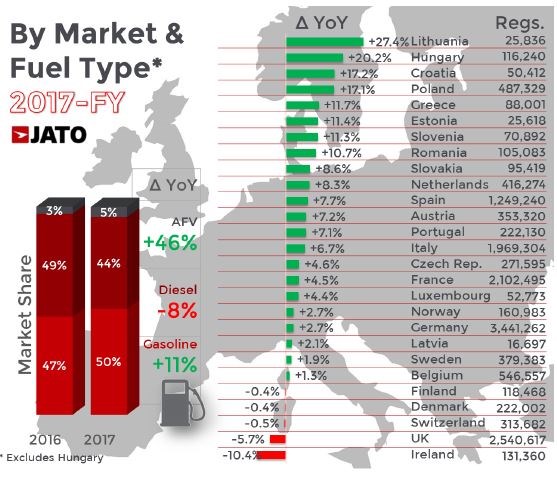 Felipe Munoz, Global Automotive Analyst at Jato Dynamics, said: “The vast majority of market growth in 2017 was driven by SUVs, which posted a record 4.56 million registrations in 2017.

Despite registering the largest registrations volume for over a decade, Jato confirmed that the issues faced by the industry including the diesel crisis and Brexit had a negative impact on growth, which decreased 6.5% and 9.3% volume growth experienced in 2016 and 2015.

Furthermore, “disappointing results for December represented the lowest registrations for the month in five years, which indicates that the industry could be slowing down”, it said, a trend exemplified by registrations of diesel vehicles, which decreased by 20.5% in December 2017.

Jato highlighted the effect on PSA Group of the acquyisition of Opel and Vauxhall during 2017 in its anylsis of the year’s registrations performance.

It said the growth of Peugeot and Citroen brands across Europe was offset by the declines of the brands, resulting in overall growth of just 0.7%.

VW Group lost 0.25 percentage points of market share, but despite this it managed to increase its volume by 2% to 3.70 million units.

Jato’s analysis of the market said that the small increase can be attributed to the Skoda and Seat brands, which increased SUV sales by 74% and 254% respectively.

Toyota and Suzuki showed the biggest growth of the year thanks to the C-HR and Ignis.

Volumes for the two Japanese brands increased by 12.4% and 20.8%, respectively.

BMW Group was another strong performer, leading the premium manufacturers. However, the slight growth of the BMW brand meant that Mercedes-Benz was the top selling premium brand for 2017, taking Audi, who came third, off the top spot from 2016.

Jato said that, overall, the three German manufacturing groups accounted for 79% of the premium market in 2017.

The Golf retained its position as Europe's most popular car in 2017. Despite this, its volume fell by 1% and it was the top seller in just five European markets in 2017, compared to eight in 2016.

More than half of its registrations were in Germany and the UK, and it was also heavily affected by the diesel crisis, with its diesel registrations falling by 14.6%, counting for 41% of its total sales (47% in 2016). 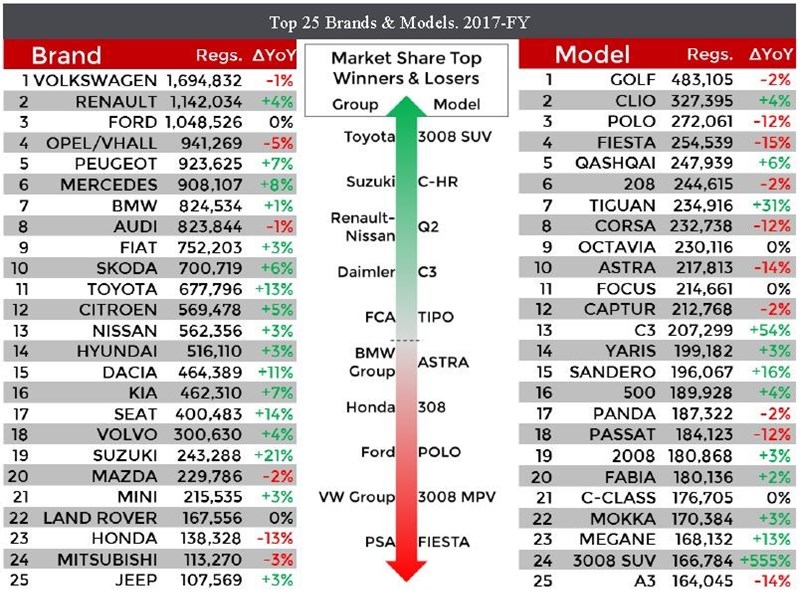 Nissan’s Qashqai was Europe's best-selling SUV for the second year in a row, hitting the top five in terms of model registrations for the first time ever.

The SUV was able to improve its position despite the volume growth of the Tiguan, which was just 13,000 registrations behind. Likewise, the Peugeot 3008 became the third best selling C-SUV of 2017.

Renault’s Clio enjoyed a strong performance in 2017, increasing its gap between the Polo and Fiesta.

Vauxhhall’s hatchbacks, the Corsa and the Astra, both posted double-digit declines for 2017, however. Jato said that the decline of the two cars was another sign of “challenging times ahead for Opel/Vauxhall”. Despite this, the Mokka, Crossland and Grandland all showed positive growth.