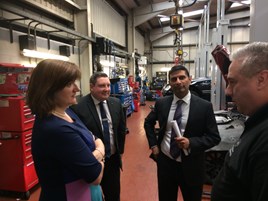 Car retailers face a £158.5 million tax rise over the next five years as “further increased liabilities if investing” place further pressure on an industry which has lost one-in-ten locations since 2009.

Britain’s largest ratings advisory, Altus Group, revealed the scale of the rising tax liability faced by the sector in research published in response to a letter to Citroen UK in which the chair of the influential Treasury Select Committee, Nicky Morgan MP, called on the brand to protect jobs following the closure of a dealership in her constituency.

Morgan, who spoke to AM on an NFDA-organised visit to Inchcape’s Loughborough Mercedes-Benz site last year, opened the letter stating that there was a “role to be played” by Citroen UK in helping to find work for staff of the former Luffield Cars franchise which closed its doors last week.

Altus Group believes that government must do more to protect the franchised car dealership sector amid falling new car registrations, however.

During the last seven years, one-in-10 car showrooms, a total of 574, across England and Wales, have disappeared from the rating list, having been converted into other forms of use as consumers increasingly use the internet to purchase new cars and manufacturers consolidate their dealer presence, Altus said in a statement.

Altus Group said: “Rateable values of every commercial property in England and Wales were adjusted to reflect changes in the property market. The new rateable values have already been used to determine the basis of the tax calculations for rates which came into effect on 1st April last year and determine property tax bills for the next five years.

“However, according to a detailed analysis, new rateable values published show car showrooms across England and Wales saw their property assessments increase by £62.89m, up 12.65%.”

The Altus Group analysis shows that the 5,746 car showrooms across England and Wales liable for rates had a combined rateable value of £496.96 million based on the last property assessment in 2010, which formed the basis of tax bills for the last seven years, but increased to £559.85 million from April 1, last year.

As a result, Altus Group projects that the amount payable under the new rateable values averaged out over the next five years across all car showrooms in England and Wales represents a £31.67 million per year increase in tax allowing for transitional relief and forecasted inflation.

The Altus Group data shows that car showrooms paid between them over £247.37million in rates for 2016/17, which will increase over the next five years to £279.06 million per year on average.

“Dealers should expect further increased liabilities if investing. All too often a too formulaic an approach fails to take account of the value drivers of modern operators or appreciate the complexity of rental agreements between manufacturers and operators leaving grounds for an appeal.”