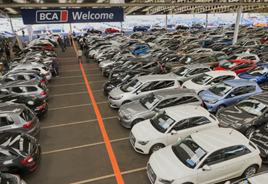 Used vehicle values rose by 7.88% as BCA auctions processed record volumes of car sales in its auction sites across the UK during January, its monthly Pulse Report has revealed.

The average price of a vehicle sold by the remarketing specialist reached £9,298, which was on a par with values seen in October and November, and up on the figure seen 12 months earlier. 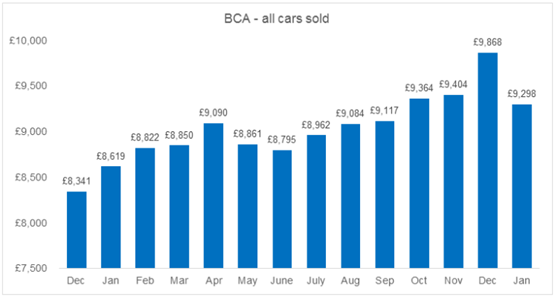 However, the Report claimed that the sold volumes achieved by BCA were of more significance, as they reached record levels during the first month of 2018.

In the second week of January, previous weekly sales records were smashed by over 10% as BCA sold 25,500 vehicles across the network with numerous centres around the 24 strong UK network reporting record trading.

The Pulse Report stated that, year-on-year, the headline value figure was up by £679 – equivalent to a 7.8% improvement – reflecting “both the richer mix of cars available at BCA over the past 12 months and the substantial levels of demand experienced this January”.

Stuart Pearson BCA managing director for UK remarketing, said: “January was an exceptional month across BCA’s network as we handled and sold record volumes of vehicles.

“The used car sector certainly started the year strongly, with competitive bidding across the board from high value prestige stock to older, higher mileage budget vehicles.

“The weather had no impact on trading, with buyers switching to our Live Online platform if travel was difficult.”

Pearson added: “Despite the sharp rise in volumes, supply and demand was well balanced and buyer activity was strong and confident.

“That said, the competition for the buyers’ wallet remains intense and BCA is launching a number of digital initiatives and service enhancements that will firmly put the customer at the heart of our business activities over the coming months.

“BCA expects to see strong demand over the coming week as we approach the March plate change with a healthy sales program in place to support this.”

An average January value of £10,513 sees fleet and lease vehicles remain at near-record high, representing a small decline of £91 (0.8%) against December. 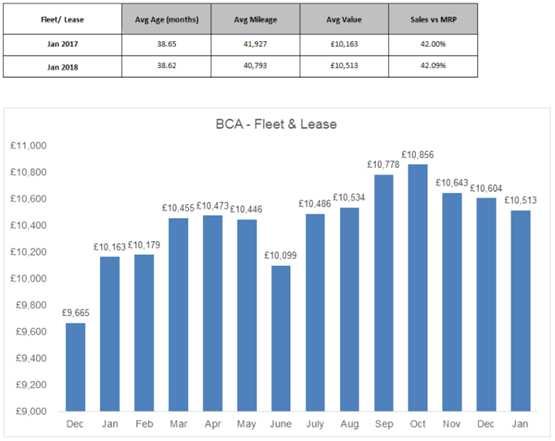 Retained value against original MRP (Manufacturers Retail Price) improved slightly to 42.09% in January.  Year-on-year values were up by £350 (3.4%), as average mileage continued to reduce.

BCA said that model mix has a significant effect in this very low volume sector, with brand specific winners and losers.