The European new car market ended the first quarter of 2018 with its highest level of registrations since the year 2000 - despite a 5.2% decline during March.

Jato Dynamics’ monthly statistics related to the new car sales performance of 27 markets across the region recorded a total of 4.27 million – up 0.7% on 2017’s 4.24 million – in Q1, with March registrations of 1.84 million vehicles.

SUVs posted a record market share in Q1, recording 1.4 million registrations and counting for one in every three cars registered.

Jato said that Europe had outperformed levels seen before the economic crisis despite car registrations falling by 5.2% in March and UK market’s 12.4% fall during the month.

Felipe Munoz, JATO’s Global Analyst, said: “This increase in registrations for Q1 2018 is an encouraging sign and indicates that the European car industry could continue to grow this year. However, the UK continues to hold back Europe and is hampering overall growth, reflected by its poor performance in March and for the quarter overall.”

These were offset by strong performances in Spain, Poland, the Netherlands and the Eastern European region.

Diesel-powered vehicles showed continued decline in the Q1 results from Jato, accounting for just 38% of registrations, according to data provided by 18 of the region’s markets.

Alternative Fuelled Vehicle sales increased by 23.4%, but Munoz said that the diesel decline isn’t having an impact on the popularity of AFVs. He said: “Most consumers are turning towards gasoline cars rather than electric vehicles.”

Also in continued decline was the MPV segment. During Q1, MPV’s market share decreased 2ppts to 6.1%.

Despite its Peugeot brand increasing its volume by 9.2%, registrations for the PSA Group stalled at 696,300 for the quarter.

Jato said: “This was due to a drop posted by its Opel/Vauxhall brand, which was negatively affected by the decline in the UK car market.”

Renault-Nissan was the third largest car maker with 613,200 units registered. However, its volume decreased by 0.8% due to declines at both Renault and Nissan.

Hyundai and Kia, meanwhile, posted the highest percentage increase, with volumes up by 7% to 277,800 units as a result of the new Kia Stonic and Hyundai Kona crossovers. 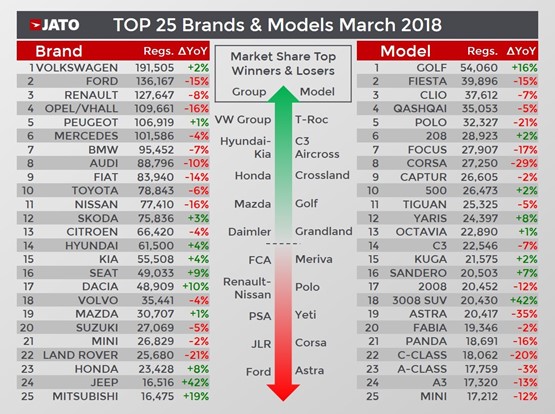