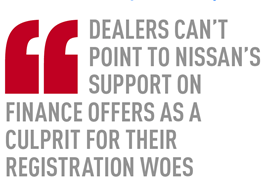 At the half-way point of 2018, some big volume players are struggling with challenging market conditions.

The third quarter of this year is likely to be more unpredictable due to the introduction of the Worldwide Harmonised Light Vehicle Test Procedure (WLTP), which could see heavy pre-registrations in August to dispose of stock before the September deadline (see the results of AM’s survey on WLTP on page 8). This, in turn, is likely to mean plate-change sales will be lower than expected as a result.

Ford’s response for Q3 has been to continue the 0% finance offers it was running in Q2. In fact, the strong 0% support for Ford mirrors the offers it had in Q3 2017, although monthly payments have been adjusted to a slightly higher level than 12 months ago.

However, Ford’s Fiesta, the best seller in June and for the first six months of this year, is still available for £160 over three years at 0% for a Zetec 1.0-litre Ecoboost.

In contrast, Volkswagen, now Ford’s closest rival in terms of volume as Vauxhall’s registrations shrink away, only has offers in place until the end of August, opting to switch its plan of attack for the plate-change month.

VW is discounting its entire SUV range by £500 for anyone who test-drives and buys in July.

The Polo and Golf are at 4.9% and 5.5% respectively, so it’s not a straight fight on APR for those with rival models on their consideration lists. There is the added bonus of VW discounting the Polo by £1,000 and the Golf with £1,500 to any customer that buys on finance.

Nissan is another franchise that has seen some heavy volume reductions in the first half of this year. The Japanese brand has been hit with a 30% decline in registrations over the past six months, likely to be down to a drop-off in demand for its volume seller Juke, which has found itself in a crowded B-segment crossover market and in need of a fresh generation model.

Dealers can’t point to Nissan’s support on finance offers as a culprit for their registration woes. There are some really strong 0% deals on core models the Juke and Qashqai, at £179 and £189 a month respectively.

Nissan’s French alliance partner Renault is seeing double-digit drops too, although to a slightly lesser extent, at 15.2% down at the half-year point, to 34,636 units.

While both franchises will have similar lines of credit funding finance deals across both manufacturers, Renault is offering the majority of its models at 4.9%, including its volume player Clio, rather than the 0% offers for most of Nissan’s range. However, the Captur is still available at 0%, which will help battle against the crowded market, as seen in the example with the Juke.

There could be another sticking point for customers on Renault’s offers – a 6,000-mile limit. That’s fine for those doing short trips in a Clio, but for anyone in a Megane Sport Tourer GT Line dCi 110, likely to be doing more motorway miles, that could mean excess mileage payments when it comes to the end of three years.

While Renault will be making more money with its APR it’s not to the detriment of its model range’s affordability. The mean average payment for Renault’s range is £253 vs £294.80 for Nissan (partly skewed due to the £699 a month GT-R) and many popular models are still under £300 a month.