WLTP to drive the demise of the optional extras upsell 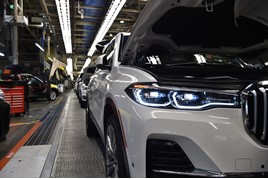 Car dealers’ opportunities to upsell customers with an array of optional extras could be diminished as WLTP emissions tests deliver a tax penalty for larger wheels, spoilers and tow bars.

Autovista Group has conducted a study which found that commonly selected combinations of options can have a significant impact on tax.

“NEDC emissions testing was based on vehicles with limited equipment fitted as standard,” said Samuel Keates, director of specifications at Autovista Group.

“Under the new WLTP regime, worst- and best-case cars need to be tested with their optional equipment fitted to present a clear view on more achievable driving emissions and fuel consumption for each level of specification that is offered.”

Autovista examined the impact of options on a specific variant of a premium-brand D-segment model that is a popular choice with fleet buyers.

Depending on body style and drivetrain, the model variant has CO2 emissions ranging from 152-166g/km as measured by the WLTP test. In NEDC-correlated terms, the figures range from 124-136g/km.

Although this is not a vast range, it does have tax implications. For example, fitting a tow bar can increase CO2 emissions by 1-2g/km because of the impact on weight and aerodynamics.

A panoramic roof generates a similar effect. An increase in wheel size affects the weight and rolling resistance of the car; fitting 18-inch wheels instead of 17-inch wheels adds about 2g/km more in CO2 emissions.

Fitting run-flat tyres as an option instead of the standard tyre repair kit also increases emissions by about 1g/km. It is therefore easy to see how a combination of options can add up to make a difference to the emissions profile of a car and, in turn, its tax liability.

Premium brands typically have more optional extras than vehicles from the volume manufacturers and so could be more adversely affected. Conversely, Japanese and Korean OEMs could stand to benefit as their strategy has typically been to compete by offering higher levels of specification as standard on their cars than their European peers but at a similar price point.

Given the additional challenges in gaining WLTP type approval for all model variants, the additional complexity for consumers and dealers, and the higher tax liabilities themselves, it is not entirely surprising that many OEMs are consolidating their optional equipment offerings.

BMW is already looking to streamline its manufacturing process, offering fewer engine variants and less equipment options and SEAT is also now offering its cars with fixed trim levels instead of options.