Car manufacturers' rush to sell new cars which are not compliant with the new WLTP and RDE fuel economy and emissions legislation has created a “false economy” in which sales rose 23.1% in August.

In what is typically the second smallest sales month of the year for franchised car retailers across the UK, a total of 94,094 units were registered to new owners as OEMs encouraged pre-registrations and delivered dealer incentives to clear their stocks of cars only compliant to the previous NEDC testing regime. 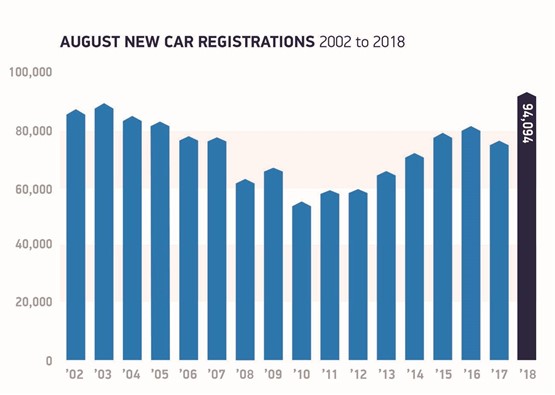 Fleet operators also flocked to take advantage of deals and beat tax changes, the Society of Motor Manufacturers and Traders today reporting that consumers and fleets boosted year-on-year registrations by 23.3% and 19.7% respectively, while the smaller business sector rose 166.4% - equivalent to an uplift of around 1,500 units against August last year.

However, August’s rush is expected to be followed by a slow September as manufacturers struggle to meet demand as they continue to battle to re-homologate their vehicle ranges to the Worldwide Light Vehicle Test Procedure and Real Driving Emissions tests - leading to an anticipated shortfall in supply.

Commenting on today’s published results, SMMT chief executive Mike Hawes conceded that the boom in August sales was a result of the legislation switch. He said that the past month had seen “some significant variances as regulatory changes have disrupted some supplies”, adding: “It would be wrong to view the market as booming.”

Hawes said: “In the long term, however, the new emissions certification test will give consumers renewed confidence in the performance of all vehicles, helping them choose the latest, cleanest technology that best suits their driving needs, whether that be petrol, diesel, hybrid or plug-in.”

Demand for hybrid and plug-in cars surged in August, rising 88.7% on the same period in 2017 with record one-in-12 buyers going electric. 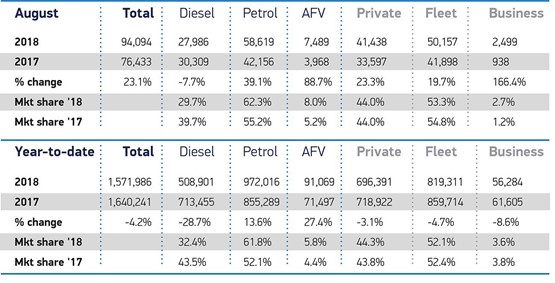 The AFV sector now accounts for 8% of the market – its highest ever level – as billions of pounds of manufacturer investment help deliver more ultra-low and zero emission models to the market.

The SMMT said that, in the year to date, the overall market remains down by 4.2% after a turbulent first eight months.

In June a survey of AM readers revealed that 55.6% of franchised car retailers had been advised by their manufacturer partners to expect a restricted supply of vehicles during September as OEMs worked to re-test, and re-develop engine line-ups to abide by the new legislation.

“We are hearing of car brands who will not have some new models available to sell in September, so the introduction of WLTP will undoubtedly hit some dealers’ bottom lines,” said Karl Davis, Coachworks’ Consulting’s managing director.

“Any shortfall in new car sales during September is going to make some dealer targets difficult, if not impossible, to achieve and could pull down Q3 profitability.

“Manufacturers are desperately trying to get new cars type-approved under WLTP and into showrooms, so the problem could wash itself through by the end of Q4. But, if the stock shortages continue then some customers might take themselves out of the market until next year.”

Commenting on the buoyant August results today, Auto Trader director Ian Plummer said: “August was definitely a buyers’ market this year as consumers took full advantage of the great deals on offer as many manufacturers scrambled to beat the deadline of the new Worldwide Harmonised Light Vehicles Test (WLTP) regulations.

“This may have been a very strong August, but of course it’s a false economy. As we saw in March 2017, when registrations were brought forward in advance of changes to Vehicle Excise Duty, WLTP will put huge pressure on September.

“What’s more, delays in producing and approving new car stock to the new rules is likely to continue into Q4, which will hamper sales as retailers and consumers will be limited to what’s available.

“The outlook for the rest of the year is highly uncertain and likely to be very different to typical seasonal patterns.

“With September sure to be well below par, the extent to which the market can pick up again in the final months of 2018 as new WLTP approved stock begins to filter through will depend on whether manufacturers choose to continue to support their retailer partners and incentivise consumers with strong offers as they did in August.”

National Franchised Dealers Association (NFDA) director, Sue Robinson, added: “UK retailers are pleased with August’s performance due to the pull forward effect on the market. However, we need to be aware that the market is likely to be affected over the remainder of the year and into 2019 by WLTP and the issues arising from its introduction including the impact on company car tax and Vehicle Excise Duty rates."