The Society of Motor Manufacturers and Traders (SMMT) has called for a Government re-think of its policies to encourage the sales of low-emission vehicles after hybrids bucked October’s new car registrations decline.

Registrations of hybrids and hybrids rose by 30.7% last month as the wider market suffered a 2.9% decline, with 153,599 registrations overall, but SMMT chief executive Mike Hawes said that change was needed to ensure AFV growth continued.

The October performance leave the UK’s new car market down 7.2% year-to-date, with the SMMT expressing hopes that the gap may narrow slightly as supply issues resulting from September 1’s introduction of the new Worldwide Harmonised Light Vehicle Test Procedure (WLTP) begin to ease. 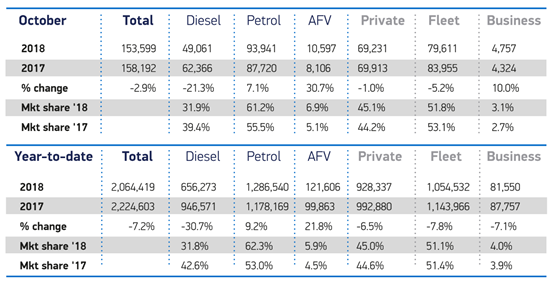 But Mike Hawes, chief executive of the SMMT, said that Government had a part to play in the future growth in sales of cleaner vehicles after last month’s growth in the AFV segment.

Hawes said: “VED upheaval, regulatory changes and confusion over diesel have all made their mark on the market this year so it’s good to see plug-in registrations buck the trend.

“Demand is still far from the levels needed to offset losses elsewhere, however, and is making Government’s decision to remove purchase incentives even more baffling.

“We’ve always said that world-class ambitions require world-class incentives and, even before the cuts to the grant, those ambitions were challenging.

“We need policies that encourage rather than confuse. Government’s forthcoming review of WLTP’s impact on taxation must ensure that buyers of the latest, cleanest cars are not unfairly penalised else we will see older, more polluting cars remain on the road for longer.”

Hybrid and plug-in hybrid vehicles, which make up the majority of AFV sales due to their greater flexibility, also enjoyed strong uplifts, growing 31.0% and 19.1%, respectively.

The SMMT said that this was not surprising given the announcement that the Plug-in Car Grant (PICG) was to be cut for pure electric cars and withdrawn completely for plug-in hybrids – although, due to lead times, the full impact may not be seen for several months.

Forecasts for AFV demand published by the SMMT have shown that registrations are expected to grow 82.5% from 2017 levels by 2020.

Similar growth (of 88.3%) is projected for plug-in electric cars, with 92,620 new plug-in hybrid and battery electric cars expected to be sold in the same year – taking market share to around 4%.

But the SMMT said in a statement: “This is at the lower end of government’s 3% to 7% stated ambition, with cuts to the Grant further undermining industry’s ability to deliver this ambition.”

New vehicle registrations saw declines in both private and fleet sectors during October, with registrations down 1% and 5.2% respectively, the SMMT said.

It added that “continuing uncertainty over government policy on diesel” saw demand for newer, low emission vehicles fall by a further 21.3%.

Sue Robinson, director of the National Franchised Dealers Association (NFDA), noted that “October’s small decline in new car sales shows that WLTP continues to distort the market and constrain the supply of new vehicles to the UK."

She added: “NFDA is encouraged by the strong sales of used vehicles and the continuously increasing market share of AFVs, whose sales were up 30.7% in October. It is vital that this key segment of the market continues to be supported by the Government.

“Despite short-term challenges, consumer footfall remains strong. Retailers are working hard to inform UK motorists about the new generation, WLTP compliant diesel and petrol cars as well as electric and plug-in hybrids, where consumers’ confidence still needs to be supported.

“As stock supply improves, we expect the market to perform better going forward and, in particular, in the first quarter of 2019”.

Andrew Hooks, chief operating officer of carwow, placed the blame for the declining market squarely at the door of Brexit.

He said that "Brexit is paralysing the motoring industry", adding: "There cannot be a proper recovery until we know what the country’s future looks like.

“People are reluctant to buy and manufacturers are stuck between a rock and a hard place as they look ahead to life after Brexit - there is no denying this is taking a toll month after month.

“The industry is doing all it can, with offers from all major manufacturers tempting new car buyers and softening the blow, but we simply cannot do this alone. All we are doing is papering over the cracks.

“Electric and hybrid registrations continue to grow sharply, but now that the government has withdrawn the plug-in car grant how much longer will this continue? Last week’s Budget left many questions unanswered, with no mention of last year’s £450 million investment into infrastructure to support electric cars, instead focusing on short-term gains like the fuel duty freeze and minor road repairs.

“The UK car market is strong, we should not forget that, and will recover fully. However, while the short term future remains so clouded, we should all prepare for more months of struggle like this.”