The Society of Motor Manufacturers and Traders (SMMT) has confirmed that supply shortages caused by manufacturers’ WLTP testing backlogs triggered a 20.5% decline in new car registrations in September.

The manufacturer body said that consumer, fleet and business deliveries were impacted as OEMs lost the battle to homologate their ranges for the new Worldwide Harmonised Light Vehicle Test Procedure and related Real Driving Emissions (RDE) test, which came into force on September 1. 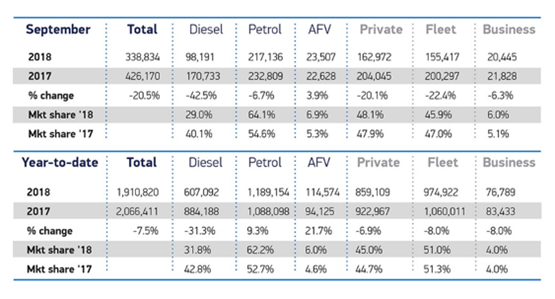 Mike Hawes, SMMT chief executive, said that it was “no surprise” that the legislation changes had impacted the market, blaming a short timeframe for manufacturer to homologate their range’s to the new standards.

Hawes said: “With the industry given barely a year to reapprove the entire European model line-up, it’s no surprise that we’ve seen bottlenecks and a squeeze on supply.

“These are exceptional circumstances with similar declines seen in other major European markets.”

The SMMT’s figures showed that private consumers, fleets and business registrations declined by 20.1%, 22.4% and 6.3% respectively during September.

Registrations of petrol and diesel cars also fell, while hybrids and plug-in electrics fared better, up a modest 3.9%.

Declines were seen across almost every vehicle segment, with MPVs and Specialist Sports cars showing the biggest falls, down 54.8 and 50.9%, the SMMT said, adding that luxury saloons were the only segment to register growth – up 3.5%.

Overall, the year-to-date registrations are now 7.5% behind 2017, however the SMMT suggested that some rebalancing was expected as an increasing range of new models were certified for sale and backlogs ease.

In this month’s AM Magazine, the combined effects of WLTP legislation and anti-diesel sentiment are analysed in a special News Insight report.

In contrast to Hawes’ comments, Cox Automotive’s Philip Nothard suggested that the effects of WLTP could be felt by franchised car retailers for some time to come. He said: “The issues retailers face now in terms of supply will likely stretch right into January of February. It’s going to be a very challenging fourth quarter for franchisees of certain manufacturers.”

“September’s performance was a matter of basic economics; there simply weren’t enough cars on forecourts that met the new WLTP standards for retailers to sell.

“However, there were some brands that were better prepared than others. Whilst the Volkswagen group brands struggled, other German prestige marques, such as Mercedes and BMW, performed much better and seem to have better anticipated the production of WLTP compliant cars in advance of the new regulations.

“For volume brands, Mitsubishi also had a very strong month, and as a result is joining Seat as one of this year’s fastest growing brands.”

Plummer added: “2018 has been very challenging for both retailers and manufacturers, with the fuel debate and Brexit anxieties denting consumer confidence, and inflationary pressure on exchange rates, hitting profits.

“Coupled with changes to Vehicle Excise Duty and the introduction of WLTP disrupting the typical seasonal trends, it’s also been a very difficult year to predict.

“There’s reasonable optimism that the arrival of new WLTP stock in the UK over Q4 should allow retailers to catch back some of September’s lost sales and finish 2018 on a positive note hitting monthly numbers which should exceed prior year.”

Sue Robinson, director of the National Franchised Dealers Association (NFDA), said that the introduction of WLTP in September had affected not only the UK but also other major European markets which, in many cases, fared worse.

In Germany new passenger car registrations declined by 30.5% in September, in France sales decreased by 12.8% after August’s increase of 40%; Spain saw a decline of 17%, following a jump of 48.7% in August, while in Italy the market was down 25.3% following a growth of 9.5% in the previous month.

Robinson said: “The declines across the main European markets demonstrate the challenges that WLTP has posed to manufacturers not only in the UK. As today’s figures show, certain brands have fared worse than others due to the complexity and scale of the new testing regime."

She added: “We expect the market to remain steadier through the remainder of the year as stock supply improves. The used market is likely to continue to perform well”.