Could Tesla profitability benefit from a franchised dealer network? 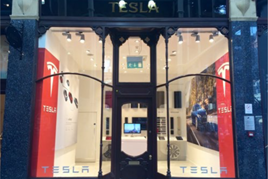 Tesla’s determination to dispense with a franchised car dealer network could be partly to blame for the electric vehicle (EV) manufacturer’s 2019 cost-cutting drive, it has been claimed.

California’s pioneering EV producer announced earlier this month that it would be implementing a 7% reduction in hourly and salaried staff while eliminating its sales referral program and increasing the cost of charging vehicles via its Supercharger charge point network in a bid to deliver greater profitability.

But in a column for Forbes, automotive sector consultant Jeremy Alicandri, of New York-based Maryann Keller & Advisors, said that the brand’s financial shortcomings could be the result of its determination to pursue a direct sales model.

Alicandri said that Tesla’s approach of building its own components, rather than relying on global suppliers, and targeting production efficiency through increased automation had both brought challenges, but said that its decision to dispense with traditional retailers could have proved to be its most costly decision.

“One major area where Tesla has received very little return on its investment is its direct sale model,” he wrote.

Writing for Forbes, Alicandri said that it was no secret that Tesla does not want franchise dealers, adding that the manufacturer had spent billions of dollars on its own retail locations, service centres, call centres, and the sales staff.

He claimed that the result had been that, despite Tesla’s high gross margin, it was left with the highest selling, general, and administrative (SG&A) expenses of any of its established competitors (on a per unit basis).

The brand’s liability for new car inventory had also proved “burdonsome”, Alicandri said, with Tesla forgoing the payments made by franchised retailers for vehicle stock leaving the factories of rival brands with a more traditional sales model.

“With a franchise model, all of these tasks (and the associated financial debt and liability) would be left to Tesla’s dealers”, he said.