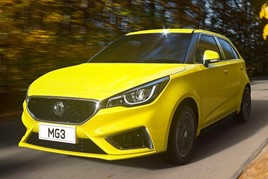 How the September numbers are in, there is a clear picture that value brands are flourishing this year.

MG and Dacia, which have posted nearly 40% growth year-to-date in registrations, both regularly feature in AM’s round-ups of most affordable offers.

As one of the most affordable electric vehicle crossovers on the market – at just £279 a month with under £3,000 for a deposit – the ZS EV will help drive volumes for MG.

This is the sort of price that could convert nearly new used car customers to try an EV for the first time and MG is supporting the dealer network with a £3,000 deposit contribution on its ZS EV in Q4 to get things off to a strong start.

The internal combustion engine version of the ZS also gets deposit support with £1,000 to help take the monthly payments down to £179 over four years.

MG’s representative examples online for the smaller MG3 highlight low deposit and low monthly payment options, pushing the price down to under £100 a month, or still a relatively low £169 a month if you don’t have a part-exchange or don’t want to put down several thousand pounds on a deposit.

MG3 customers can also take advantage of 0% APR in Q4, something new for this quarter compared with the past three months.

It’s a small vehicle line-up for MG, but the messaging is clear online and it’s easy for customers to see where they stand.

Unlike Porsche. It would have been good to look at how Porsche is underpinning its 174% increase in registrations success with its finance offers in September, but the representative examples are nowhere to be found online. Perhaps if you have to ask, you can’t afford the monthly payments for new models such as the Taycan EV?

At the other end of the value chain, Dacia is storming ahead into Q4, much as it did in Q3, with a high APR of 6.9% across the board.

The approach doesn’t appear to be hurting volumes as it has gone from 0.9% market share to 1.4% so far this year.

The Sandero Access is still on offer at £99 a month, but the deposit levels for that model and across the range have all been bumped up by a few hundred pounds each to make the balloon payments more affordable compared with Q3. But no model in Dacia’s line-up breaks the £200 a month barrier.

It’s not only value brands that have seen success in a challenging market this year, with Lexus also increasing its numbers by 20.4% YTD.

Its strategy on finance in Q4 is quite similar to Q3, with similar APRs. Its lowest rates were reserved at 1.9% for its IS F Sport, RX F Sport and RX L.

The Japanese brand is supporting its dealer network with deposit contributions of £2,000 across most of its model range in Q4, including the CT, IS F Sport, NX, ES, RC, RX F and RX L. The more exclusive LS and LC models don’t get a deposit contribution and the new UX crossover gets a slightly lower contribution, at £1,000 off.