The average UK car retailer saw profitability decline by 75% year-on-year in October and is likely to end 2019 with a 9% overall reduction in overall profit, ASE has reported.

The automotive retail analyst and consultancy said that its data for the month had revealed that the average retailer made a profit of £1,500 during October, compared to £6,000 during the same month in 2018.

However, ASE chairman Mike Jones said that, while the result “may look disappointing, we should remember that the 2018 result was bolstered by the unwinding of some of the WLTP issues from that year”. 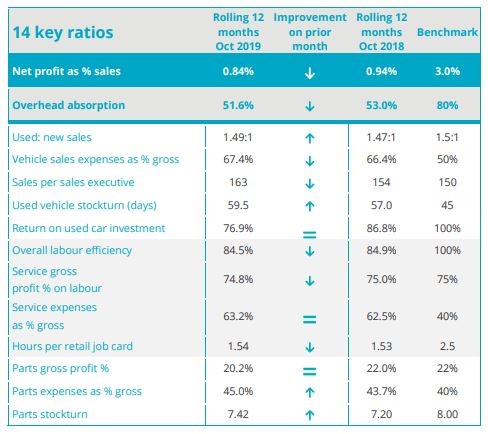 Used car stock remained at historically high levels during October, according to ASE.

However, Jones said that retailers need to continue the current focus on improving stockturn.

Another area of concern for Jones, was the continued growth in car retailers’ overheads.

He said: “Over the past year we have seen an increase in general overheads of 3%.

“As we move into 2020 I expect to see a real war on costs taking place.

“The new car market is not forecast to improve, therefore retailers will need to manage cost increases to compensate, whilst continuing the focus on used cars and aftersales.”

Jones said that overall retailer profitability for the previous 12 months had fallen 9% on the prior year at the end of October, reflecting the challenges we have seen, particularly in the new car market.

He added: “It now looks likely that overall profitability for the year will settle at this level for the year.”