Boost your earnings from SMART repair 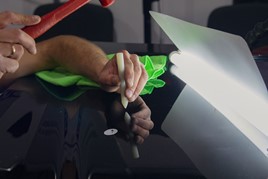 Smart repair insurance is a win-win product. It means extra income for the dealer and buyers should see a return on their ‘investment’ when it comes to reselling the vehicle. Debbie Kirlew reports

As a value-added product at the point of sale, smart repair cover is now an invaluable source of revenue while its multiple usage and high claims frequency tick the Financial Conduct Authority (FCA) box.

Phil Newstead, one of the owners of DHMB, which operates the Dent Repairs, SMART Repairs and Wheel Repairs brands, sees dealer profits in fast vehicle prep.

The vast majority - 95%, of their business - is vehicle prep and the company has experienced average year-on-year growth of around 35% with the first two months of this year already.

Newstead said: “The quickest, cheapest way to get a vehicle to forecourt standard is by using smart repair.”

Mark Llewellyn, managing director of smart repair network Revive! began offering the repair services as a mobile technician more than 20 years ago when his biggest obstacle was explaining the benefit of professional repairs for minor dents and scratches.

Two years ago, Revive!, which counts two of the top seven groups in the AM100 among its clients, launched its app providing full visibility of costs and returns for dealers.

Llewellyn said: “If you are managing 15 sites, two or three will be overspending on used vehicle preparation and you can ultimately reduce their spend.”

Autoprotect Group provides both the insurance policies and mobile technicians through its fully-employed Shine network.

Nick Franklin, head of distribution and product development, said: “Over the past five years, smart repair has come much more to the forefront of the range of add-on products dealers offer.

"If you compare the frequency of claims to Gap insurance, it’s around 4% whereas smart insurance claims are around 35% with certain points in the year as high as 70%.

"In terms of delivering value to the consumer, smart insurance is a product of significant value.”

The Shine repair network has grown over the past year from around 45-55 technicians to 90 while the network also won the BSI Kitemark Excellence Award at the British Bodyshop Awards last year.

Franklin added: “There’s a much higher propensity to claim so it’s important that the product delivers significant return.

"Dealers need absolute confidence in the product and the company when it comes to managing the best journey for the customer.”

Inevitably, there’s a mix of performance across the group’s dealer clients with some as high as 40% penetration with the average 25-30%.

Newstead sees smart repair insurance as an ‘easy sell’ for dealers since part-exchange vehicles are discounted for minor damage: “Essentially, you are saying if you had this product, potentially your car would have been worth £1,000 or £800 more than what we gave you, but the policy is only going to cost you £300-odd.”

With 200 technicians across the country, Revive! meets both dealer vehicle preparation requirements and provides mobile repairers when a claim is made. Llewellyn tracks the growth of smart repair insurance to the stricter controls placed on selling GAP by the FCA.

He added: “If we go back five years, the claims part of the business was negligible and now it makes up 10% of our revenue.

"For the cost of the product, I think it will grow and grow.”

Lexus Reading, part of the Jemca Car Group, has its own on-site smart repair facility for used car stock preparation and has been selling smart repair insurance for the past five years, achieving between 71% up to 88% on new and 31% to 45% on used.

General sales manager Lee Coverdale said: “It’s popular as people clearly care about their cars and want to keep them looking their best, it also shows additional value and therefore gives confidence for a stronger part exchange price in the future.

"Along with the amount of cover received against the initial cost it is a clear win-win for the consumer.”

Coverdale views the product as a retention tool while acknowledging a noticeable difference when vehicles with smart repair insurance are returned for resale compared with those which were not covered, with the trade cost typically at £300-£500 more, but he added: “This isn’t a reflection on the true value of the product because the consumer may have had multiple repairs on the same areas so their purchase has looked fantastic throughout the whole period of ownership.”

It is a view underlined by auction house Aston Barclay which has reviewed the condition grades of used cars it sold late last year.

The average value of a grade three and four car during these months was £6,429 and the difference in price was 6.99% of CAP’s value, which equates to £449.

By investing £185 in refurbishing the grade four car to grade three, the vendor would be rewarded with a £264 uplift in price in the current market.

Martin Potter, Aston Barclay Group’s auction managing director, said: “Each car has to be taken in isolation as to what prep it needs prior to being auctioned or being added to a dealer’s forecourt.

"In a buoyant market refurbing a car from a D or E to a C grade is worth the investment in time prior to sale as you will generally get your money back and more when it goes under the hammer.”

Newstead believes aftersales departments can use smart repair as a new revenue generator by offering a service to car owners whose vehicles are in the workshop and would benefit from a smart repair, but don’t have cover.

He said: “There is a very clear upsell opportunity. It does have its challenges because the vehicles are probably up on the ramp for 70% of the time when in the dealership and people want their car back the same day.

"But I think potentially, it is a real revenue opportunity which no one has really got right yet.”

However, Coverdale sees the logistics in offering a smart repair service to vehicles in the workshop without cover as complex, while multiple areas of damage would make it difficult to agree the extent of repairs.

One area which could see growth, but is proving a challenge, is advanced driver-assistance systems (ADAS) equipment on modern cars where many sensors are located in the bonnet.

Llewellyn said: “We have to be careful about what we can and can’t do, many manufacturers can be a bit slow with getting information out and we want to make sure we are doing the right thing.

"Some manufacturers are saying we shouldn’t repair bumpers, but I’m not sure customers will be happy to take their vehicle to the manufacturer’s bodyshop and wait for a few days for a job that would take a few hours at their convenience.”

Dealers enjoy much-needed point of sale revenue and when the car is returned to stock, prep is reduced resulting in a quicker time to forecourt increasing stock turn.

Meanwhile, the FCA is unlikely to have concerns for a product that delivers such obvious benefits for customers.

The market is also likely to grow, as Llewellyn said: “Last year we undertook 200,000 repairs but there are 31 million cars on the road with estimates that 50% have some kind of minor damage which could be fixed with a smart repair.

"I think we are in the infancy of this and demand will continue to outstrip supply.”

Buy in sets Yorkshire SMART repairer on path to expansion

Buy in sets Yorkshire SMART repairer on path to expansion