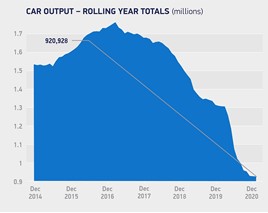 UK car production slumped 29.3% to deliver its lowest output of vehicles since 1984 in a COVID-19 impacted 2020 stalled by plant closures and enforced dealership shut-downs.

The Society of Motor Manufacturers and Traders (SMMT) reported this morning that manufacturing output declined 29.3% – virtually in-line with the decline in car sales across a challenging year – to 920,928 units.

Production for UK and overseas markets declined 30.4% (to 171,890) and 29.1% (to 749,038), butthe SMMT sought to highlight the importance of ongoing exports, stating that more than eight-in-10 cars headed overseas during the period.

The SMMT, which has forecast new car sales ibn excess of two million in 2021, has said that independent estimates of UK car production projected that volumes would reach one million this year, but added: “Much depends on the COVID recovery.”

Reflecting on the “devastating” impact of COVID on the sector in 2020, SMMT chief executive, Mike Hawes, said: “These figures, the worst in a generation, reflect the devastating impact of the pandemic on UK automotive production, with COVID lockdowns depressing demand, shuttering plants and threatening lives and livelihoods.

“The industry faces 2021 with more optimism, however, with a vaccine being rolled out and clarity on how we trade with Europe, which remains by far our biggest market.”

Hawes added: “The immediate challenge is to adapt to the new conditions, to overcome the additional customs burdens and regain our global competitiveness while delivering zero emission transport.

“We will continue to work with Government to attract investment in battery production and supply chain transformation as we transition to smart and sustainable mobility, supporting jobs and driving economic growth nationwide.”

December’s vehicle production output was down 2.3% to 71,403, according to the SMMT, which said that some firms had been affected by border closures and thus component supply issues.

Ongoing issues with a supply of semi-conductors from China is a concern for the future, with one franchised car dealer group boss telling AM: “That impact could be felt in three to four months’ time and we have to be ready for it.” 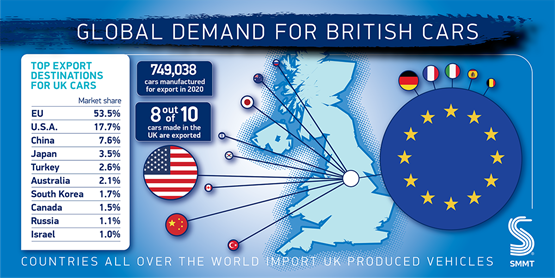 Combined production of battery electric (BEV), plug-hybrid (PHEV) and hybrid vehicles (HEV) models also rose to 18.8% of all cars made in Britain, up from 14.8% a year before, with BEVs increasing to a 4.5% share, up from 3.4%.

The UK turned out 172,857 alternatively fuelled vehicles, with 79.6% of these exported, the SMMT said, stating that this was “evidence of the country’s existing capability in building the vehicles essential to a Net-Zero future”.

The SMMT is now keen to see a resurgence in investment in UK automotive in light of the Brexit free-trade agreement struck with the EU.

Securing the deal led to Nissan committing to its future at Plant Sunderland, a decision which will see the Japanese carmaker bring battery production to the city to support its Leaf EV manufacturing line.

It total, £3.23 billion of automotive investment was publicly announced for the UK last year, however over 80% of this amount was attributable to one company committing to a battery Gigafactory, the SMMT noted.

It added: “More commitments of this nature will be essential for the future of a sector that is the country’s largest exporter of goods, turns over £78.9bn annually and employs more than 180,000 people directly with many more across retail and other indirect sectors.”

Honda’s temporary plant closure could be “tip of the iceberg” for supply issues, warns VRA

Honda’s temporary plant closure could be “tip of the iceberg” for supply issues, warns VRA