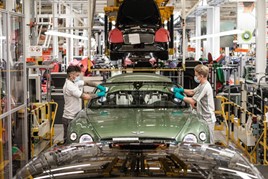 The COVID-19 recovery of UK car production continues to be hampered by component supply shortages, with May volumes down 58% on the five-year average for the month.

The Society of Motor Manufacturers and Traders (SMMT) today (June 25) revealed that 54,962 cars were produced by UK plants in May. 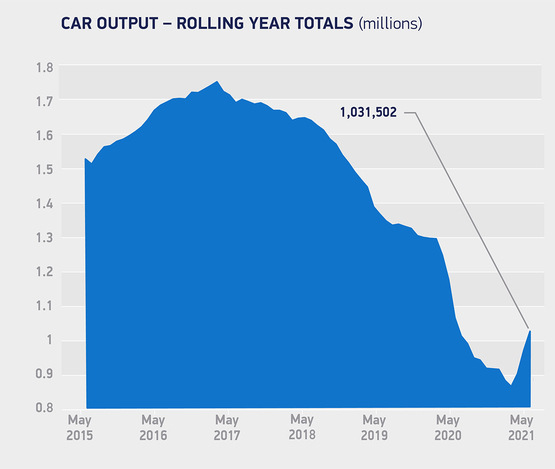 “If the UK is to remain competitive, therefore, it must ensure it has a globally attractive policy framework for both vehicle production and the supply chain.

“Accelerating zero emission car production is part of this package, so while one-in-five models made here this year is alternatively fuelled, we need to drive investment in R&D, charging infrastructure and the market to ensure we can deliver the net zero future society demands.”

Although a fifth of cars now built in the UK are alternatively fuelled vehicles (AFV), the SMMT pointed out that just one-in-16 are fully electric vehicles (EVs).

UK car production continues to be export-led, with 83.6% of all cars built so far in 2021 shipped overseas.

Commenting on today’s SMMT car production data, What Car? editor Jim Holder said: “Though manufacturing figures are still down on pre-pandemic levels, the news is encouraging, in particular as electric vehicle production continues to increase.

"While the UK’s first battery manufacturing plant has now been confirmed, more investment is needed if the UK is to remain a home of manufacturing and assembly for electrified vehicles in the future.

“A more immediate concern for the industry remains the current microchip or semiconductor shortage that is impacting both vehicle supply and trim levels, which in return is affecting whether buyers opt for new or used models.

“Our own research of 1,149 in-market used buyers found 29% were originally in the new car market, but have switched to the used market in search for lower prices and better stock availability.”