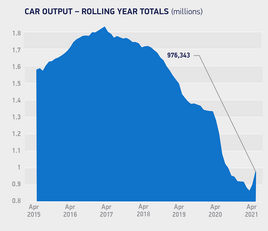 UK’s car manufacturing recovery remained “challenging” after a surge in April production still left the sector's output 15% down on the first four months of 2019, the SMMT has said.

Manufacturing data published by the Society of Motor Manufacturers and Traders (SMMT) showed that 68,306 cars rolled off production lines in April, up dramatically on a COVID-hit month in 2020 – when just 197 cars were produced.

The result came despite issues triggered by a global shortage of semiconductors but still left volumes 3.8% below April 2019 and 15% down on 2019 year-to-date, despite being 17.3% up on the first four months of last year.

In the four months to the end of April UK car makers produced 374,864 cars.

Compared with a five-year average, production was down 42.9% for the month and 31.1% for the period January to April, the SMMT said.

SMMT chief executive, Mike Hawes, said: “April’s figures were always going to be exceptional as factories were closed at this time last year amid the first wave of the pandemic.

“However, the situation for UK car manufacturers remains challenging, particularly with the worldwide shortage of semiconductors affecting output.

“While it’s good news that the UK is on track with its COVID roadmap back to normality, we still need strong domestic demand and given we’re export-led, confident overseas markets to drive a recovery, both for the automotive sector and for the wider economy.”

Last month’s car production data showed that 22.8% of the UK’s output was either a full electric vehicle (EV), plug-in hybrid (PHEV) or hybrid.

Year-to-date, alternatively fuelled vehicle (AFV) production is up 33.1% on the same period in 2019.

Production for the UK market has declined 3.1% while car exports have risen 22.5% with more than eight in every ten (83.3%) cars made shipped overseas, however.

The European Union remains by far the most important destination for British cars, taking 52.1% of all exports, followed by the US (17.4%) and China (7.4%).

Car makers including BMW/Mini, Ford, Honda, Jaguar Land Rover and Nissan have all been impacted by the issue which is extending lead times and driving more customers to a used car sector which is battling to keep up with demand.

Holder said: “The latest manufacturing figures show an industry in recovery, which is welcome to both dealers and manufacturers.

“Our research of in-market buyers continues to show strong levels of demand in the market, with 31% looking to buy in the next three months.

“It will be crucial that the Government’s COVID roadmap stays on track, with dealers allowed to stay open, as showroom closures will undoubtedly have another significant impact on production lines.

“Another source of concern for the industry is the continuing microchip shortage, which is affecting both lead times and vehicle specification levels.

“Our latest research of 1920 in-market buyers has found 38% of new car buyers are not willing to wait more than two months for their car.

“If waiting times cannot be met, 35% of buyers tell us they will look at existing stock or used models instead, which will add pressure to the already inflated used car market.”