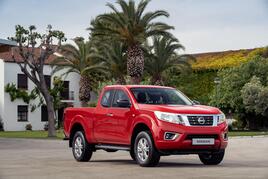 The Nissan Navara pick-up truck will no longer be offered in the UK and Europe when production of the existing version ceases at the end of the year, reports suggest.

According to Professional Pickup and 4x4 Magazine, the Japanese brand stop selling the Navara in European markets once stocks run out in early 2022.

It's another blow for the UK pick-up market, following Mitsubishi's decison to exit Europe, and Mercedes-Benz's withdrawal of its X-Class from the market.

The news may well come as a boost to Isuzu UK, however, which is hoping to drive sales of its new Isuzu D-Max pick-up with expansion of its UK retail network with 10 new franchise appointments this year.

AM understand that a facelifted version of the Nissan Navara will continue to be offered in other markets.

European production of the vehicle - which has been largely unchanged since 2014 - will end in December, when Nissan closes its Barcelona factory.

Nissan has not revealed any plans to replace the Navara in European markets, but claims that it is "not announcing the end of Navara for Europe".

Production is reported to have dropped to just 40 vehicles per day at Nissan's Barcelona plant as a result of poor demand and the cancellation of the short-lived Mercedes-Benz X-Class.

The Renault Alaskan, which is also built on the Navara’s platform, was only offered in limited markets and never made it to the UK – further affecting output.

The new Navara will be built for other markets at Nissan’s plants in Thailand and South Africa.

Nissan confirmed that the revised Navara will not be on sale throughout Europe, but said “we will continue to sell the current European Navara model, which is produced at the Barcelona plant.”

A spokesperson added: "Navara is an important product and the Navara currently sold in Europe meets the needs of our consumers. Future product plans will be announced in due course.”