As the British people face significant increases in the cost of living, the Chancellor Rishi Sunak has revealed tax cuts to fuel and wages in today's Spring Statement to the UK Parliament.

To appease drivers facing painfully high prices for petrol and diesel he will cut the fuel duty by five pence per litre from 6pm tonight.

"It's a tax cut for hard-working families and businesses," said Sunak, announcing only the second reduction in fuel cuty in 20 years.

For working people, he also announced he's equalising the National Insurance (NI) threshold with the Income Tax threshold from July, meaning people will earn £12,570 per year before they begin to pay either.

Such a measure gives workers £330 back in their pocket, and for 70% of workers it counteracts the 1.25 percentage point rise in the National Insurance rate, which will still go ahead next month.

The Institute of Fiscal Studies calculates that only those earning more than £35,000 per year will pay more NI.

And his finale was announcing a cut to the basic rate of Income Tax will come in 2024 - likely the year of the next General Election - from 20 pence down to 19 pence in the pound.

The Office for Budgetary Responsibility (OBR) has warned the UK's inflation rate, which rose to 6.2% in February, could climb further to an average of 7.4% this year.

Sunak said the OBR has not yet counted for the full impact of the war in Ukraine, adding: "We should be prepared for the economy and public finances to worsen, potentially significantly, and the cost of borrowing is continuing to rise."

In the next financial year the UK Government will spend £83 billion on debt payment.

The chancellor's speech showed there were few significant cuts that the Government is willing, or able, to provide as it aims to reduce borrowing.

"More borrowing is not cost- or risk-free," he said.

The OBR forecasts that, by 2024, inflation will be back under control, the economy will be growing and the public debt falling sustainably.

He reminded smaller businesses in the retail sector that the 50% business rates relief, up to £110,000, comes in from April, and the Employment Allowance, designed to help small firms create jobs, rises to £5,000, giving some 500,000 businesses another £1,000 tax cut, he said.

And, critical of the UK's private sector's need to increase R&D spending, productivity, innovation and vocational sklls development - all of which are behind countries such as Germany and the USA - he wants to work with businesses ahead of the Autumn Budget to understand whether the Apprenticeship Levy is doing enough, whether businesses need tax cuts to encourage investment. 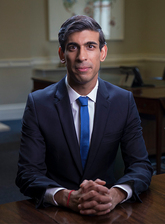