This has pushed down the rolling 12 month profit percentage to 1.37%, says dealer profitability specialists ASE.

"This is not to say that profits are falling in absolute terms on a rolling 12 month basis, with the average dealer increasing profits slightly compared to the prior 12 month period," said Mike Jones, ASE chairman.

"Within these averages we continue to see prestige car dealers improve their performance, with traditional volume brands struggling in comparison.

"We will have a more precise idea of 2015 profitability at the end of March once Q1 bonuses are recognised.

"Given that registration levels bonus incomes should be healthy in spite of increased targets. We will need to wait to see how much of this has been held out to assist in the disposal of self-registered units over the months to come. Given the volumes of vehicles registered in the last few days of the month many dealers are likely to need a significant provision against these cars.

New vehicle sales in February increased 2% over February 2013 compared to an increase in registrations in the month of 3%.

"We will be monitoring the levels of sales compared to registrations in March and report on the result for the first quarter as a whole. Hitting the Q1 target is pivotal to most dealers in achieving their budgeted annual profitability and we believe a significant level of self registrations were undertaken to ensure this was met. Time will tell how this impacts on profit." 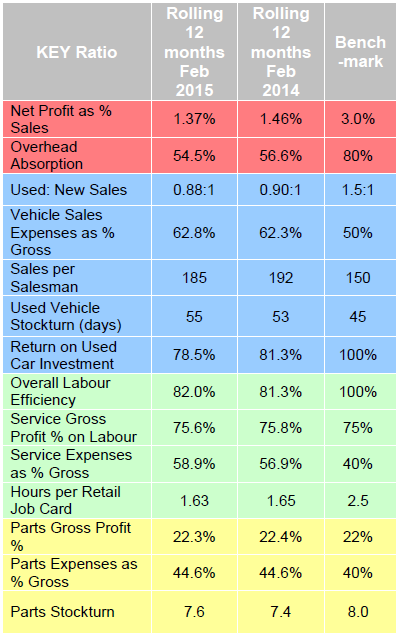