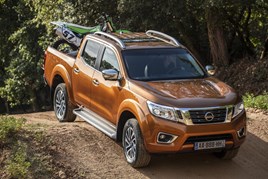 Nissan is promising greater capability, new technology and better efficiency from its new NP300 Navara to be shown in Europe for the first time next month.

Due to be unveiled at next month's Frankfurt motor show, the NP300 Navara will come with a new 2.3-litre diesel engine as well as a new five-year/100,000-mile warranty.

The King Cab features a substantially updated version of the leaf spring design fitted to the previous generation model. The new 'over slung' leaf weighs 7kg less than the previous 'under slung' design, it also gives the King Cab a 3.1% improvement in rear wheel approach angle and, Nissan claims, delivers a reduction in road noise.

The NP300 Navara’s new 2.3-litre dCi engine is up to 24% more efficient than the unit it replaces and is the cleanest and most economical in its sector. Available with two power output options, 160PS and 190PS, the range-topping version introduces twin turbocharging technology to the sector for the first time and is claimed to deliver low running costs and substantially reduced CO2 emissions, although Nissan is not yet revealing the figures.

Transmission optoions include a standard six-speed manual or an optional seven-speed automatic.

The load bed itself is home to further Nissan innovations in the form of the brand’s acclaimed C-channel load system. With heavy-duty channels on the rear cabin bulkhead and bed sides, owners have complete flexibility when it comes to securing vulnerable loads.

Ponz Pandikuthira, director of light commercial vehicles for Nissan Europe said: “Since we built our first Pick-Up in 1935, over 14 million customers in 180 countries around the globe have come to depend on Nissan pick-ups to transport their families, colleagues and cargo, sometimes in the toughest of circumstances. Nissan pick-ups have often been the lifeblood of their communities and a trusted work partner to businesses and tradespeople.

"Now in its 12th generation, we’ve harnessed this experience and our customer feedback to develop the new Nissan NP300 Navara which sets a new benchmark for performance, refinement, convenience and running costs in the sector.”