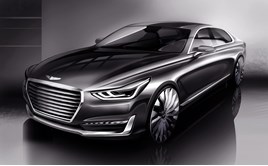 Hyundai has revealed its new G90 luxury saloon that will sit at the top of the range of its new Genesis brand.

The G90 hints at the recently-launched Genesis brand’s design identity and future direction.

The launch of G90 is scheduled for early next month in Korea.

Hyundai confirmed it will launch Genesis as a seperate luxury brand with a six model line-up by 2020.

Hyundai told AM it was too early to say if the franchise will launch in the UK, but it will first launch in South Korea and will likely be available in US markets.

The strategy follows on from Asian manufacturers like Toyota and Nissan launching separate luxury focussed brands like Lexus and Infiniti.

The company said it will launch a Genesis midsize crossover and SUV as part of its six-model line-up.

Euisun Chung, Hyundai Motor vice chairman said Genesis will be aimed at “savvy, affluent progressives, who are reasonable and young”.