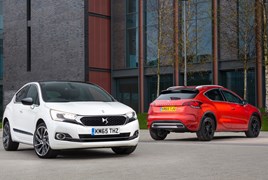 Customers can choose from six engines in total, including the three-cylinder turbo petrol PureTech 130. A new high-performance THP 210 petrol engine is available on the DS 4 (excludes Crossback). Three Euro 6 BlueHDi diesel engines are also specified, including a BlueHDi 180.

The new DS 4 introduces a two-tone offering with a choice of four colours for the roof and rear spoiler, the door mirrors and hub caps.

The optional Perla Nera Black, Whisper Purple, Virtual Blue or Tourmaline Orange finish on the roof mean that up to 38 colour combinations are possible.

Technology additions for DS 4 and DS 4 Crossover include compatibility with Apple’s Carplay and they are the first models from PSA Peugeot Citroen to get it. The cars also feature Mirror Link which lets drivers pair their phone with the seven-inch colour touchscreen.