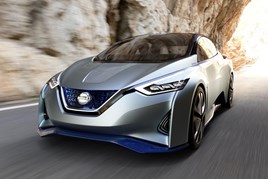 Ten cars featuring autonomous driving technology will be launched by the Renault-Nissan Alliance by 2020 as part of a project targeting ‘zero emissions and zero fatalities'.

The partnership announced that its aims to improve safety on the roads, reducing the risks of driver error by introducing a raft of new technologies on mainstream, mass-market cars at affordable prices, it has revealed.

A statement issued by the Nissan Silicon Valley Research Center in California revealed that 2016 will mark the debut of vehicles with “single-lane control,” a feature that allows cars to drive autonomously on motorways, including in heavy, stop-and-go traffic.

In 2018, Renault-Nissan will launch vehicles with “multiple-lane control,” which can autonomously negotiate hazards and change lanes during motorway driving.

And 2020 will see the launch of “intersection autonomy,” which can navigate busy junctions and heavy urban traffic without driver intervention.

Renault and Nissan have both set their sights on improved safety in recent times.

Autonomous drive is expected to help further reduce driver error, which is responsible for up to 90% of all fatalities.

A Renault-Nissan Alliance spokesman said that all of the Alliance’s autonomous drive technology will be available at the option of the driver.