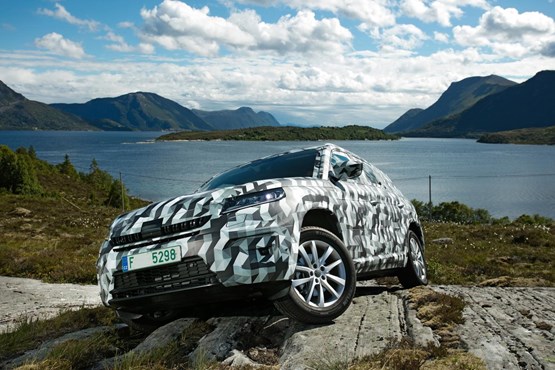 Skoda’s first official images of its forthcoming Kodiaq SUV have come in the form of a heavily-disguised test vehicle.

But Skoda’s head of sales operations, John French, recently told AM: “The finished vehicle will be very loyal to the VisionS concept unveiled at the Geneva Motor Show.”

New details about Skoda’s first entry into the SUV D-segment state that the newcomer – expected on sale in Q1 of 2017 – will be available with a choice of five engines: two TDIs and three TSIs, with the most powerful petrol engine being the 178bhp 2-litre TSI.

Six-speed manual or DSG transmission will be available, along with a choice of front- or all-wheel drive, with functions including Driving Mode Select and Dynamic Chassis Control (DCC).

The 4.7 metre long seven-seater will aim to increase Skoda’s market share and further strengthen its position in international markets.

The brand’s chief executive, Bernhard Maier, described the Kodiaq as a “great all-rounder”, adding: “It combines an active sense of vitality with the brand’s classic qualities – a high degree of functionality and an outstanding amount of space.

“As always, in the design process we have focused on offering a little bit more car, and as a result, the best vehicle in the segment. In addition, with its emotive design, the Skoda Kodiaq is a strong presence on the road.”

Among new innovations set to debut on the Kodiaq is a new door-edge protection that deploys automatically to avoid damaging the vehicle in garages or car parks.

There will also be an electric child safety lock for the youngest passengers, as well as a sleep comfort package with special headrests for long trips.

Online access and the SmartLink connectivity platform – featuring Apple CarPlay, Android Auto, MirrorLinkTM and SmartGate – will also be an option on entry-level specifications and standard higher up the range, along with a Phonebox wireless smartphone charging system.

Last month AM revealed how Skoda plans to grow its UK sales through a new SUV line-up and increased fleet penetration.