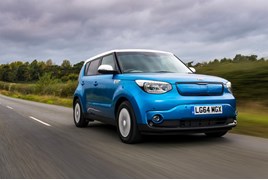 The take up of Ultra Low Emission Vehicles (ULEVs) has increased by 49% in the last quarter, according to figures from the Department for Transport (DfT).

It was also revealed that registrations of ULEVs have grown by 253% over the past two years.

The DfT said the rise has come following the extension of the plug-in car and van grant scheme, allowing more than 100,000 additional drivers to benefit until at least 2018.

In addition to the grant extension, the Government is spending £600 million in this parliament to support the rise in ULEVs to achieve its aim for almost all cars and vans to be zero-emission by 2050.

John Hayes, roads minister, said: “I am delighted to see more drivers than ever are choosing electric vehicles.

“These statistics show our investment is making a real difference in encouraging people to choose electric and help protect the environment.”

The figures also show the total number of vehicles registered in the quarter was 805,000, a 2% increase on the same quarter last year and are now above 800,000 for the first time since 2003, showing the boost the UK car industry gives the economy.

AM Poll
Has the UK motor retail industry handled the coronavirus lockdown well? Please leave a comment.
Vote
View all
97