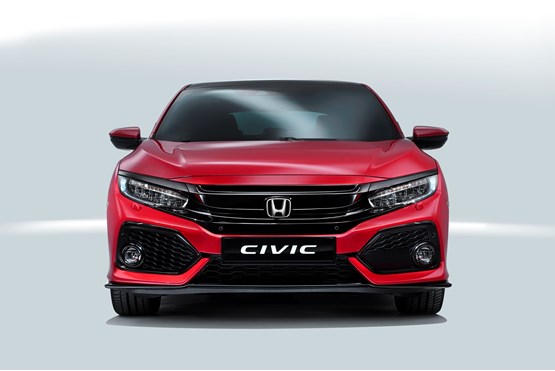 Honda has revealed its all-new Civic ahead of the Paris Motor Show, where it will be officially launched.

The company had remained tight lipped about the pricing and finer details of the car but what has been shared is that only two petrol engines will be available when the car goes on sale in March.

A re-worked version of the current 1.6-litre diesel engine will be available from November.

Launching the HR-V and CR-V last year was the turning point for Honda following a ‘hard time’ when the brand struggled to compete with its range of aging models.

Now the company is experiencing strong growth – 16.5% in the UK last year – and is expecting the new Civic to have an even greater impact.

It’s lower and wider than the previous model, which gives it a more aggressive stance, especially in sport trim which adds larger wheels and bumper extensions.

The Turbo VTEC engines are available in either 1.0-litre three cylinder or 1.5-litre four cylinder capacities. The smaller unit develops 127hp and the larger makes 179hp. Both can be fitted with a six-speed manual or CVT gearbox.

A host of technology is available on the new Civic, including a fully digital dashboard, a seven-inch touchscreen infotainment system with bluetooth and a wireless charging pad for mobile devices.

Phil Webb, head of car at Honda UK, said: “We are supporting dealers to offer corporate sales, 75% of the network is already setup and we are aiming to make it 100%”

Retention is also a key area of focus for Webb who admits that the brand needs to be expanded to attract younger customers. The dilemma, however, is that he doesn’t want to lose the loyalty of existing, older, clients.

The new Civic is better suited to tackle both markets as it falls midway between the C and D segment, offering a refined and comfortable drive but with the dimensions and handling characteristics of a hatchback.

Prices are yet to be announced but Webb said they will pushing the new model on two year PCP deals with a five year care plan, maximising the residual value for both the first buyer and dealer but also benefitting the second owner who will be retained in the network with free servicing.

AM Poll
Has technology taken jobs out of your dealership? Please leave a comment
Vote
View all
215