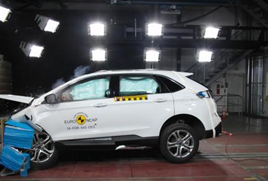 Disappointing results in the latest European cars crash tests has led to calls for consumers to shop with safety in mind - and for manufacturers to fit “life-saving” equipment as standard.

It was announced today that the Ford Edge and Hyundai Ioniq got five star Euro NCAP ratings, but the safety organisation expressed concerns over rear passenger safety that exceeds safe limits.

Thatcham Research is the independent automotive research centre and voice of Euro NCAP in the UK.

Its research director Matthew Avery said: “The Ford Edge and Hyundai Ioniq are likely to be targeted at families with children or carrying elderly passengers.”

“So to have rear passenger scores where both head and chest injury parameters exceed safe limits is of particular concern to us.

“Both manufacturers seem to have it wrong with the level of rear seatbelt tension they provide.

“Our advice to consumers is don’t  just take Euro NCAP ratings at face value, look at the detail.

“If the safety of your rear passengers is important to you, and it should be, then there are other vehicles in the same category that have been tested in 2016 and rated five stars that have far better rear occupant protection.”

While both models protected children buckled in to child car seats, some of the injury parameters for both neck and chest exceeded safe limits for adult passengers.

And when tested for six-year-old and 10-year-old children sitting on booster seats, the safe limits were also exceeded.

With the Ford Edge for example, in the frontal offset test, the readings in both the adult test, as well as with the ‘six-year-old’ dummy placed in booster seat, only provided marginal protection of the chest and poor protection of the neck.

Protection of the neck was rated as poor for the ’10-year-old’ dummy in a booster seat.

A similar scenario was detected with the Hyundai Ioniq, with neck protection a concern with both dummies seated in booster seats, and marginal chest protection with the ’10-year-old’ dummy in a booster sear.

The Suzuki Ignis and SsangYong Tivoli both only received a three star Euro NCAP rating. The addition of optional safety packs increased the score on the  Ignis to a five star rating, and for the Tivoli to four stars.

Thatcham Research found the take up of optional safety packs to be extremely low, less than 3% in the UK.

The effect of this is that the majority of Ignis and Tivoli cars on the roads will be three star Euro NCAP rated cars, and will not include safety features like AEB that have been proven to reduce rear to end crashes by up to 38%.

“We’re increasingly seeing car makers opt for a Euro NCAP dual rating – a score for the standard car, and then a second rating with the optional safety pack.

“Car buyers need to make sure they understand this rating and speak with their dealership to spec their cars carefully”, said Matthew Avery, Thatcham Research’s director of research.

“Don’t be misled – do your research, as it’s only by choosing the optional safety packs that you will be getting the levels of safety you should expect.”

The optional pack to look for on the Ignis is the dual camera brake support, while for the Tivoli it is autobrake with forward collision warning.

However, SsangYong's 2017 spec Tivoli and Tivoli XLV, due to arrive next month, will come with additional safety equipment as standard including AEB.