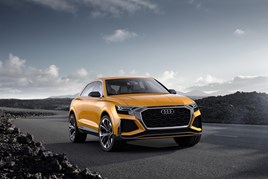 Audi has confirmed that it will add a pair of new SUV models to its line-up over the next two years.

The German premium brand will start the latest phase of its offensive on the burgeoning sector with the start of production of the Q8 in Bratislava, Slovakia, in 2018.

Production of the Audi Q4 compact SUV will begin in Győr, Hungary, in 2019.

The two new additions follow the recent launch of a new Audi Q5 and the introduction of the Audi Q2, the brand’s rival to the likes of the Mini Countryman and Mercedes-Benz GLA-Class.

Board of management member for production, Prof Dr Hubert Waltl, said that Audi was targeting “Increased competitiveness in the SUV segment”.

Waltl added: “We will integrate two completely new Q‑models into the existing production network and will thus increase our competitiveness in an extremely important segment.”

With the Q8, Audi aims to open up a new segment for its top-end models.

The coupe-style premium SUV, which made its debut in concept form at the recent Geneva Motor Show, claims to combine great spaciousness with emotive design and offers the latest technologies in assistance and infotainment systems.

Audi will produce the model in the same Bratislava plant which has produced the Q7 since 2005.

With the Q4 model, Audi is entering the segment of compact utility vehicles (CUVs).

Featuring a coupe-style silhouette, the Q4 will be positioned between the Audi Q3 and Q5.

As of 2018, Audi Hungary will also be responsible for production of the Audi Q3 compact SUV, which until then will continue to be produced in Martorell, Spain.