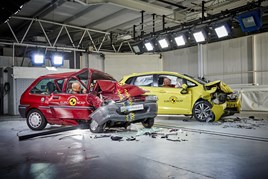 Euro NCAP has celebrated the success of safety standards which have prevented 182,000 people being killed or seriously injured on UK roads since 1997.

UK car occupant deaths and injuries have fallen by 63% since the Euro NCAP carried out its firs crash tests and delivered a damning one-star verdict on the popular Rover 100 supermini of the time.

Back then a manufacturer backlash saw many mainstream brands claim that it was ‘impossible’ to achieve four stars. Five months later, however, Volvo’s S40 became the first four-star car for occupant protection.

Today nine out of ten cars sold on the European market hold a Euro NCAP rating.

The campaign for improved vehicle safety continues, however, with Euro NCAP now campaigning for the standard fitment of automatic emergency braking (AEB) systems and push by retailers and manufacturers to promote safety, claiming such systems could prevent 2,700 deaths and serious injuries in the UK every year.

Max Mosley, the first chairman of Euro NCAP and chairman of Global NCAP said: “Twenty years on from what started as a controversial programme, rejected by manufacturers, and supposedly aiming for unrealistic safety standards, Euro NCAP is now firmly part of the automotive mainstream.

“Thousands of fatalities have been prevented, consumer demand for safety is high, manufacturers compete on safety rating results, and vehicle safety standards continue to improve.”

“Until Euro NCAP, consumers only had the manufacturers’ word for it. Now we have the safest cars ever and the safety levels of each car are there for all to see.”

Last year Euro NCAP begun a two-tier testing programme which saw vehicles tested with and without optional safety packages which include AEB.

The new system aimed to highlight the advantages of newly-emerging technology that could improve safety.

Euro NCAP Is urging car dealers and manufacturers to highlight the advantages of new technologies which are being proven to improve collision safety.

A statement from Thatcham Research said: “Thatcham Research is marking the 20th anniversary by urging consumers to further boost Britain’s road safety record by making a commitment to buy only models with a five star Euro NCAP rating and a collision avoidance technology like AEB and Lane Assist systems.”

“In 1997, many motorists were still choosing not to wear seatbelts. Only a few years later we were demanding airbags, side impact protection and other safety systems. You’re now twice as likely to walk away from a car crash compared with twenty years ago. These major changes in the way people and manufacturers prioritise safety are all thanks to Euro NCAP.

“The focus now is all about crash prevention. Making sure that Britain’s roads continue to become even safer, not just for car occupants but for every road user.  We have come a long way since the days when manufacturers met only the most basic, mandatory, safety requirements but we must continue to apply pressure.”