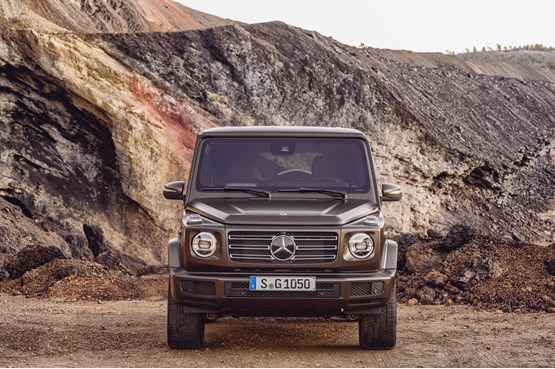 Mercedes has revealed its new G-Class SUV which will go on sale in March, following a debut at the Geneva motor show.

The iconic model has received minimal changes to its exterior but features an all-new platform to improve comfort and refinement.

Historically the model was designed for heavy-duty off-road use, but has found a new market as a premium SUV.

The latest crop of Mercedes’ driver assistance technology will be fitted, alongside a new independent suspension setup with adjustable driving modes and a 170Kg weight saving.

UK prices have yet to be revealed but in Germany the G-Class is priced from £95,233, keeping it at the level of the preceding version.

Mercedes has been careful not to lose some of the G-Class’ most prominent design features. Its externally mounted door hinges, distinctive door handles and exposed spare wheel remain.

Despite looking the same, the new G-Class is actually 53mm longer and 121mm wider than before giving it greater interior space.

The biggest visual changes are found inside where Mercedes has applied the same luxury design as used in the E-Class and S-Class saloons.

Comfort features include a memory function for the driver’s seat, seat heating front and rear, as well as luxury head restraints in the front.

Mercedes says the primary goal of the G-Class development was to redefine the quality of the handling both on and off the road.

It retains a ladder-chassis, three 100% differential locks and a low range off-road gear reduction, and gains a new G-Mode.

The G-Class changes to G-Mode independently of the chosen driving mode as soon as one of the three differential locks has been activated or the low range gear has been engaged. This off-road mode adapts the adjustable damping of the chassis and the steering as well as the accelerator characteristic, avoids unnecessary gear shifts and thus ensures optimum control and maximum off-road capability.

Two models are expected to be available in the UK: G 63 AMG and G 350d with deliveres expected in the summer.

AM Poll
Do you expect battery electric vehicles to still require an annual service? Please leave a comment.
Vote
View all
335