Kia is preparing to electrify its Sportage with the introduction of a 48V mild-hybrid version of the SUV set to be launched later this year.

The Korean brand’s new drivetrain adds a starter motor which doubles as a generator and power supply to deliver 10kW of assistance to the diesel engine in a move which it claims will reduce CO2 emissions by up to 4% on the new Worldwide harmonized Light vehicles Test Procedure (WLTP), and 7% on the New European Driving Cycle (NEDC).

The system makes its debut in the Sportage later this year but will later find a home in the all-new third-generation Kia Ceed and other Kia models from 2019.

A spokesman for Kia Motors said: “In-line with Kia’s aim to create innovative cars that are affordable for a broad range of buyers, EcoDynamics+ mild-hybrid technology offers a compelling cost-to-performance ratio compared to full hybrid powertrains. 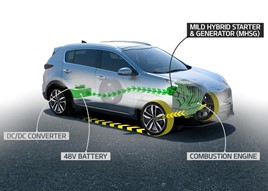 “The compact nature of the components means the technology can be integrated into existing vehicle and powertrain architectures without impacting practicality or packaging.

“Kia’s mild-hybrid powertrain is designed to fit seamlessly into consumers’ lives, with no plug-in recharging required.”

Connected by a belt to the diesel engine’s crankshaft, Kia’s Mild Hybrid Integrated Starter Generator (MHISG) operates in both ‘motor’ and ‘generator’ modes.

The system harvests kinetic energy from the vehicle during in-gear deceleration and braking and uses the power to recharge the batteries before deploying its electric load, in ‘motor’ mode, under acceleration.

Details of the pricing, performance and specification of the new Kia Sportage SUV have yet to be announced.