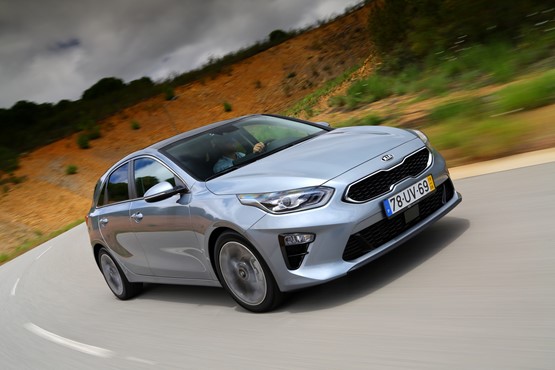 Kia’s third-generation Ceed will be priced from £18,295 when it goes on sale on August 1, just in time for the September plate-change.

The new model drops the previous 'Cee'd' apostrophe style for the nomenclature.

It will also be the first Kia to offer ‘level two autonomous driving’ Lane Following Assist technology and there will be a new 140ps 1.4-litre T-GDi and 99g/km CO2 ‘U3’ 1.6-litre diesel. Four trim lines will be available from launch – grade ‘2’, ‘Blue Edition’, grade ‘3’ and ‘First Edition’.

The new Ceed comes with seven airbags, High Beam Assist, Driver Attention Warning and Lane Keeping Assist with Forward Collision-Avoidance Assist as standard. Lane Following Assist can be added as an optional extra and works by tracking vehicles in front of the Ceed in traffic and detects road markings to keep the car in its lane on the motorway. The system controls acceleration, braking and steering depending on the convoy of vehicles in front, using radar sensors to maintain a safe distance from the vehicle in front. Lane Following Assist operates between 0 and 80mph.

The Ceed will also be available with Kia’s new ‘EcoDynamics+’ 48-volt mild-hybrid technology next year.

Emilio Herrera, chief operating officer for Kia Motors Europe, said: “After more than a decade on sale, the Kia Ceed continues to underpin the brand’s consistent growth across Europe.

“Like its predecessors, the new model has been designed and engineered exclusively for European buyers, fine-tuned thanks to the feedback from a growing Kia customer base.”

From launch, the Ceed range will be available in a choice of 11 paint finishes. A selection of wheels and designs are available, with buyers able to choose from 15-inch steel wheels, 16-inch steel or aluminium wheels, and 17-inch two-tone diamond-cut alloy wheels.

Herrera said: “2006 saw Kia’s European market share reach 1.5%, and just over a decade later, in 2017, it’s grown to 3.0 per cent*. Since the introduction of the Ceed, Kia’s annual European sales have more than doubled, with over 472,000 cars sold last year. The Ceed model family will play a major role in our efforts to achieve annual sales in excess of half a million vehicles this year and beyond.”

Kia is to reveal full UK pricing details for the Ceed at a later date.