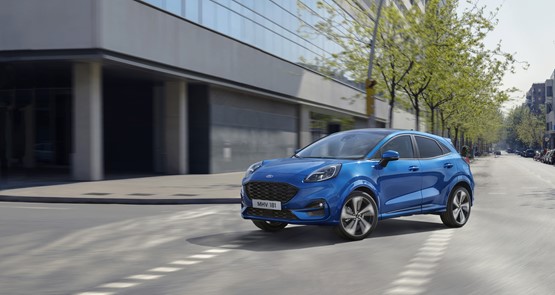 Ford has revealed the new Puma, a compact crossover that is set to rival cars like the Renault Captur and Kia Stonic.

The brand previously announced that every one of its models launched after the all-new Focus onwards would include an electrified option. Puma customers will be among the first to experience Ford’s mild-hybrid architecture.

Offered in 125PS and 155PS variants, the mild-hybrid system continuously monitors how the vehicle is being used to determine when and how intensively to charge the battery.

Buyers can also opt for the 125PS EcoBoost without the mild-hybrid system. A diesel varient will be available later in the year too.

From launch, the Puma will be offered in sporty ST Line trim and more luxurious Titanium. The interior is carried over from the Fiesta but Ford says it has made a number of ehancements to give the Puma a more premium feel.

A large boot aids practicality, with 456 litres of cargo space plus a Megabox feature that can be used to carry unstable items, such as golf clubs, in an upright position.

The new Puma joins Ford’s expanding line-up of SUV and SUV-inspired crossover models in Europe, including the Fiesta Active, Focus Active, EcoSport, Kuga, Edge, and the all-new Explorer Plug-In Hybrid. SUVs now account for more than one in five Ford vehicles sold in Europe, and sales rose more than 19% in 2018.

Puma will go on sale at the end of the year, and will be produced at Ford’s Craiova Assembly Plant, Romania, following nearly €1.5 billion investment since 2008.