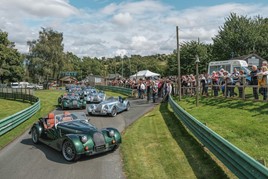 Morgan has delivered the first 11 Plus Six production demonstrators to its UK dealer network at an official handover event in Gloucestershire.

The 11 retailers received the cars at the annual Morgan ‘Thrill On The Hill’ event at Prescott Speed Hill Climb.

The arrival of the new demonstrators means dealers can now get customers into the car to test drive.

Morgan said it has already had 150 pre-orders for the £77,995 for the Plus Six since it was revealed at the Geneva Motor Show in March this year.

Customer deliveries are expected to begin during Q4 of 2019.

The Plus Six features a BMW three-litre inline six-cylinder turbocharged engine and is the first model to be built on the company’s new CX-Generation aluminium platform. Fewer than 1% of its parts are shared with other Morgan models.

The first 50 cars to be built will all be First Editions in ‘Emerald’ or ‘Moonstone’. Priced at £89,995, these editions are fixed specifications and include a lightweight composite hard-top roof.

Steve Morris, Morgan chief executive, said: “The sight of all 11 Plus Six First Editions is one to behold, and this handover marks the culmination of years of hard work from our small team based in Malvern Link.

“I would like to thank all the staff at our factory and our Morgan dealerships in the UK and around the world, for their continued efforts in bringing Plus Six to market. We look forward to a bright future for this fantastic new Morgan.”

AM Poll
Are video appointments a better use of sales executives' time than face to face appointments? Please leave a comment.
Vote
View all
2366