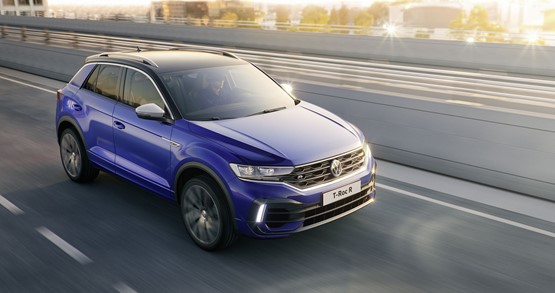 Priced from £38,450, the new model boasts a 300PS power output and 4Motion all-wheel-drive and features the same two-litre turbocharged petrol engine as the Golf R and Cupra Ateca.

In the T-Roc R the engine is mated to a seven-speed DSG. It develops 400Nm of torque and can accelerate from 0-60mph in just 4.9 seconds – only 0.3 seconds slower than a Golf R.

Keeping the throttle buried will see the T-Roc R max out at 155mph.

Specification is based on the range-topping T-Roc R-Line, but adds sportier seats, a bunch of ‘R’ badges and four exhaust tailpipes.

The T-Roc R can be further enhanced with Volkswagen’s Dynamic Chassis Control (DCC) adaptive damper system at a cost of £695. It offers greater flexibility through a choice of multiple driving modes that alter the characteristics of the car.

VW says the introduction of the T-Roc R marks the first time since the Scirocco R that two R-badged models have been sold side-by-side in the UK.

Claire Haynes, T-Roc product manager at Volkswagen UK, said: “With the arrival of the R, the T-Roc again demonstrates the impressive versatility of its packaging, with the ability to be a stylish and practical family SUV, a fun-focused Cabriolet or, now, a driver-focussed R sports car.

“With nimble handling, large car space and performance car pace, the T-Roc R really is the consummate all-rounder, and represents the best of the past, present and future of Volkswagen R.”

When it launched the T-roc, VW said it expected the small SUV to become one of its top-three best-selling models in Europe. In the UK, the T-Roc is the brand's second best-selling model. In August it placed seventh in the SMMT's registrations list.

New Volkswagen logo to be installed at 10,000 franchised locations

New Volkswagen logo to be installed at 10,000 franchised locations