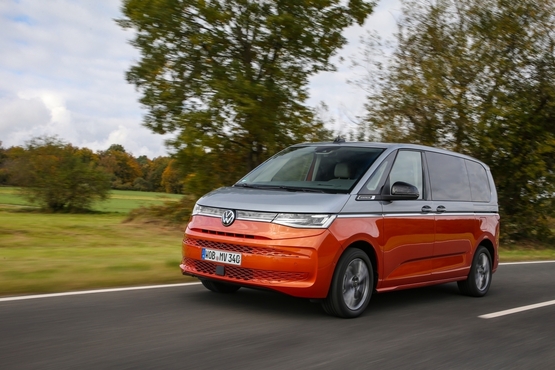 Volkswagen dealers are now accepting orders for the new Multivan, which will replace the existing Caravelle, Sharan and Touran people carriers.

The new model is priced from £43,160 and will be sold alongside the current T6 Transporter, offered as a passenger car only, but doesn’t use commercial vehicle underpinnings. Instead, the Multivan uses an extended version of VW’s MQB platform – that’s the one used by the Tiguan.

The technology-laden new model welcomes a similar digital cockpit layout to the Golf and Caddy, making use of the latest VW operating system and a pair of screens.

A plug-in hybrid (eHybrid) engine leads the line-up, with a combined power output of 218PS. Its 13kWh lithium-ion battery is housed under the Multivan’s flat floor, saving interior space, and lowering the vehicle’s centre of gravity to improve handling. The charging point is located on the right-hand side of the front wing.

From launch, the front-wheel drive Multivan is also available with two four-cylinder turbocharged petrol engines: a 1.5 TSI 136PS and a 2.0 TSI 204PS. Both are twinned with a seven-speed DSG gearbox as standard, while a diesel will join in Spring.

A special launch edition - Energetic - starts from £59,515 and is available only with the Hybrid powertrain. Additions include a Harmon Kardon sound system, privacy glass, 18-inch alloys, and panoramic glass roof.

Volkswagen is expected to launch a new Amarok later this year, which will arrive in dealerships by 2023.

The new model will be developed alongside the Ford Ranger, as part of a wider commercial vehicle collaboration agreement between Ford and VW.