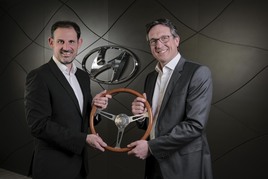 The Hyundai Ioniq 5 has been named UK Car of the Year 2022, by a panel of 29 motoring journalists.

The electric model, that launched last year, was favored for its design, performance and practicality.

The Ioniq 5 finished ahead of the Skoda Enyaq, with BMW’s iX and the Porsche Taycan taking joint third place.

“Its innovative layout means its spacious enough for large families, its efficient zero emissions powertrain is perfect for company car buyers and its luxurious eco-friendly interior elevates Hyundai into a genuine premium product.”

The Ioniq 5 was also named Best Family Car, at the UK Car of the Year Awards, earlier this month. Electric vehicles (EVs) picked up five of the nine categories in this year’s awards.

There were ringing endorsements for the Ioniq 5 from the judging panel. “A great introduction into the next stage of Hyundai electric vehicles. It looks great, has loads of space and makes going electric easy,” said Company Car Today’s Paul Barker.

Freelance journalist Guy Bird added: “The Hyundai Ioniq 5 blazes an EV trail. It’s right up there with the best of the volume carmakers and could steal sales from premium players too. Innovative, desirable, practical and brilliantly designed to make full use of its electric-only platform.”

Top Gear’s Tom Ford said: “The Ioniq 5 does a decent impression of a mobile lounge, soothing away commutes and longer journeys. Big space for all occupants and 800v fast charging helps there, too. Plus, it looks fantastic.”

The Ioniq 5 is the first of three electric vehicles to be launched by Hyundai in the next four years as part of its newly-established Ioniq EV sub-brand.

The new car is built on Hyundai’s dedicated battery electric vehicle (BEV) architecture called Electric-Global Modular Platform (E-GMP) and is available with 58 kWh or 72.6kWh drivetrain options and with a rear motor only or with both front and rear motors and all-wheel-drive.