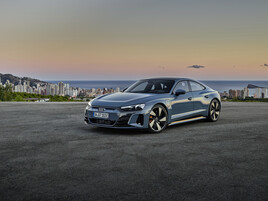 Blurring the lines between a sensible electric saloon and high-performance supercar, the e-tron GT is Audi’s flagship electric model that’s designed to give us a flavour of what’s to come from the German car maker over the next few years.

It started life as a concept car, making production just three years after its initial unveil at the Los Angeles Auto Show. The car’s development was completed alongside that of the Porsche Taycan, with both cars sharing a platform and core hardware.

Key to the e-tron GT’s performance and efficiency is aerodynamic body, which incorporates active elements such as the rear spoiler and front cooling ducts. The low roof and wide track give a unique, eye-catching look.

Two versions of the e-tron GT are offered: the 530PS Quattro and the 646PS RS. Both utilise an 800-volt electrical infrastructure, enabling a rapid charging time of 23 minutes (5% to 80%) and the ability to add 62 miles worth of range in just five minutes.

Performance is equally rapid, with the 0-62mph sprint taking four seconds in the Quattro and a little more than three in the RS.

The Quattro has a maximum range of almost 300 miles, while the RS can cover 283 miles, officially. Both models can achieve more than 200 miles per charge, in real-world driving.

Audi’s familiar switchgear can be found on the inside, where the cabin provides seating for five. Build quality and equipment levels are high, as expected from a car costing upwards of £82,000.