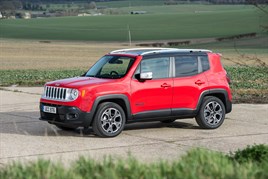 The exit of the Chrysler brand from the UK will be managed steadily, now that holders of the franchise have received their two years notice of contract termination.

FCA UK hopes that the impact of Chrysler’s withdrawal by February 2017 will be limited as much of the network has held the Chrysler franchise alongside other FCA brands such as Jeep and Alfa Romeo.

A spokesman for the company said the Chrysler 300C and Voyager had already ceased sales in the UK due to the cost of making them EU6 compliant, however the Chrysler Ypsilon supermini will continue on sale until right hand drive production ends. He was unclear when that would be.

However, it is likely to be when FCA’s assembly plant in Poland, currently building the Fiat 500 and Ypsilon, shifts to producing revised models later this year.

The spokesman suggested there will be more than sufficient opportunity for FCA to compensate for the demise of Chrysler.

The Jeep brand is expanding, having just launched the Renegade small SUV as the fourth model in UK showrooms.

In addition, FCA has plans to revamp the Alfa Romeo business, with the new 4C Spider acting as a halo model while the brand develops its rear-wheel driven rival to the BMW 3 Series ready for go on sale in 2016 and a replacement for the Giulietta family hatchback also due in 2016. A compact crossover SUV may follow later, according to reports.

Bringing Jeep and Alfa together

FCA UK plans to bring Jeep and Alfa Romeo together in the future to operate more effectively as the group’s premium franchises and to offer an alternative choice in a market dominated by German brands Audi, BMW and Mercedes-Benz.

Availability of parts and manufacturer-backed servicing for Chrysler owners will be maintained in the medium term by a network of authorised repairers, many of which will have been Chrysler dealers prior to the US brand’s exit.