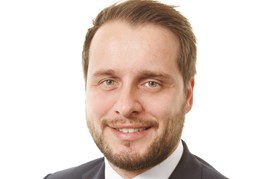 Aston, who has been in the motor trade since leaving school to join Hartwell Rover as a trainee when he was aged 16, said that he ‘felt right at home’ as soon as he met the Swansway senior management team.

He said: “As soon as I met Peter Smyth his enthusiasm was infectious and the company ethos of caring, honest and proud fell right into line with my own values, it felt like the perfect fit.”

Aston progressed well in his early career at Rover, progressing within just twelve months to become one of the top ten high achievers in the then Rover network.

After a successful seven years in the BMW network, he took a sabbatical, fulfilling a long held dream to travel around the world for a year.

Back in England Aston re-joined the BMW network and progressed to become new car sales manager where he turned an under-performing business into an award-winning one.

Relocation to Cheshire prompted the need for a change of job and Aston said that he is ‘aiming high’ after landing his new role at Swansway.

He said: “I’m ambitious and I can see plenty of opportunities within the group for those who work hard, so I’ll be aiming high.”