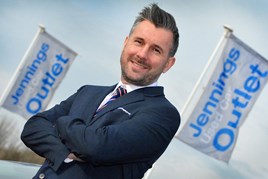 Dickson has been prompted to the role of sales controller at the group’s Used Car Outlet, located adjacent to the South Tyneside dealership, following nine years as sales executive at the group’s Ford Direct dealership on Newcastle Road, South Shields.

In his new role, Dickson – a former British Airways steward – will be responsible for assisting manager, Norman Shepherd, with the day-to-day running of the site, which houses up to 100 used and approved vehicles sourced from group stock.

He said; “I am delighted to have been given the opportunity to further develop my career.

“This is a fantastic opportunity for me and a challenge I am very much looking forward to.”

Used Car Outlet manager Norman Shepherd said: “Chris was an asset to the team at Ford Direct and I’m sure he will be just as committed and dedicated in his new role within the Used Car Outlet.”