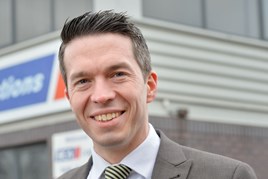 The 20-acre development is currently under construction but Burr has been tasked with developing a remarketing programme to complement BCA’s existing sales calendar and also recruiting and developing a team of staff to operate the site.

Burr, who has been with the company since 2002, will also become responsible for day-to-day operations at the current BCA Birmingham centre, as well as retaining responsibility for BCA Measham Commercials.

“Dominic will take a central role in creating a strategic sales programme for Perry Barr and building the team that will run the most modern remarketing centre in Europe.”

The new purpose-built site at Perry Barr will enable BCA to extend its physical and digital remarketing offering and will deliver a range of de-fleet, inspection, preparation, refurbishment, appraisal post-valet and logistics services.

Its remarketing facilities will include three auction halls and a digital auction suite.