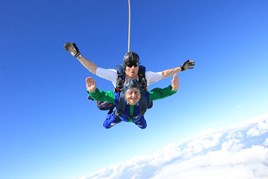 Marshall Motor Holdings’ Daksh Gupta landed a £142,000 windfall for BEN after swapping car sales for sky diving in a 13,000ft leap of faith.

Gupta overcame a fear of heights to complete the jump at the Hinton Skydive Centre in Brackley, Northamptonshire, in BEN’s first ever Industry Leader Challenge event and hopes that his fund-raising efforts will total £150,000 once the final pledges come in.

Speaking after the tandem jump, Gupta said: “I must admit the worst thing is going up. I was having second thoughts up there but it was amazing. We actually jumped from 13,000 feet, not 10,000.”

Gupta admitted that he would never take the plunge again. He said: “It was amazing but once is enough. When you come out of the plane you're actually doing 140mph freefall for about 50 seconds.

“I was definitely glad to be back on the ground afterwards.

“This had to be one of the highlights for me in terms of life experiences. It was amazing, but seriously, I'm never doing it again.”

Gupta is the first automotive industry leader to take on the Industry Leader Challenge, which launched this year.

Along with the jump Daksh charged Marshalls’ network of dealers to compete to raise cash for BEN over a week of fundraising events which included barbeques, a carnival, cycle rides, sponsored walks and a spinathon.

Gupta has now passed Industry Leader Challenge ‘baton’ on to the next automotive industry leader who will attempt to top the amount raised.

BEN will reveal the identity of the next challenger at the annual BEN Ball at the Grosvenor House in December.

Gupta said:  “I have really enjoyed taking part in the first ever Industry Leaders Challenge event for BEN and I’m thrilled that we have raised such an impressive amount of money.

“The funds raised will directly help those working in the industry when they need it the most. I would like to give my heartfelt thanks to my colleagues for getting fully behind this campaign as well as to everyone who donated; I couldn’t have done it without you.

“Following the jump I received the very sad news that my mother had passed away. She always encouraged me to support charities and help people those less fortunate than me, so I’d like to dedicate this jump to her.”